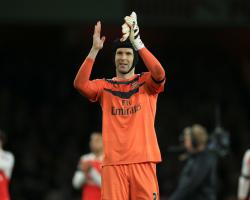 The 33-year-old secured his 170th Premier League shut-out in Monday's 2-0 win over Bournemouth - a result which also saw the Gunners move to the top of the table and Cech enter the history books.

He was Arsene Wenger's only summer acquisition at the Emirates Stadium, signed from rivals Chelsea because the Arsenal boss wanted an assured pair of hands.

A first goal for the club for Gabriel and a strike from in-form Mesut Ozil wrapped up the points against the Cherries but the clean sheet was also more newsworthy than usual.

For in keeping it, Cech continues to show what a shrewd move it was and, in picking up his eighth league clean sheet for his new side, he surpassed David James' old record.

He celebrated as he left the field, punching the air as the record he had been eyeing for some time was finally his and he knows how important his role in a title-winning side can be.

"I feel really proud," he said after the game.

"I believe that this is the best league in the world and one of the most difficult leagues to play for a goalkeeper so to have achieved such a record, obviously, it's a great personal achievement so I'm really proud of that.

"What makes me happy the most, probably, is that these clean sheets so far brought four Premier League trophies, so hopefully we will add clean sheets this season and we will celebrate at the end of the season, because this is far more important.

"I think the most important (thing) was to win the game and obviously once we got the 2-0 lead and it was going towards the end of the game, then, I have to confess that I started thinking about the record and in the last 10 minutes, I was checking the clock."

Cech is the studious type and, when it was falsely claimed he had broken the record some months ago, the Czech Republic international took to Twitter to say that someone had jumped the gun.

How did he know that? He puts it down to his father's meticulous data-collection.

"I have a kind of a chronicle where I have every game that I've played, so you just look through and you can see," he said.

"My father has a book where ever since I started playing games, he wrote down the games that I played in.

"So if you go to my website, then you will find it all there

And you can set what league, what competition, what year, whatever you want, you will find it there, so it's easy to track.

I always like to do things the right way.

"Obviously, as I was approaching the number of David James and people kept reminding me, I had a look because I really wanted to make sure that I knew when it could happen."

Cech enjoyed a brief chat with former Arsenal goalkeeper Bob Wilson as he prepared to leave the stadium on Monday night before the 74-year-old told a story about someone he labelled a "special guy".

Wilson watched on as Cech, fresh from the 4-0 hammering at Southampton on Boxing Day which delayed Arsenal's ascension to the Premier League summit for 48 hours, entered the crowd to hand over his gloves and apologise to supporters along the way.

Cech certainly has the fans onside and he will only boost that reputation if his clean-sheets, experience and all-round calming nature aid Arsenal to the title this year.

Having lifted the trophy four times across London at Chelsea, the former Rennes man is a perfect judge of title-winning credentials - and he spots that in his current dressing room.

"I think that the great thing is that we go game by game," he added.

"We don't feel overwhelmed when we win

Obviously, you are disappointed when you lose a game like we did two days ago but the reaction and consistency of the work is very important and so far we've been doing that, preparing every game as well as we could.

"Now, we are in a really good position so hopefully we can carry on that

Now going into the New Year, we are in a position where we can actually aim for our targets."