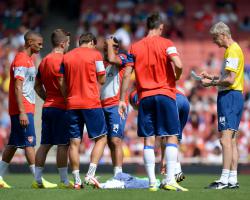 May's 3-2 win over Hull City ended a long and painful nine-year trophy drought for the North London club, and as they return to Wembley Stadium, Arsenal are setting their sights on even bigger prizes.

Manchester City's 6-3 win over Arsenal last term exposed the big-game frailties that were to fatally undermine Arsene Wenger's side's title pursuit, but with a trophy under their belts at last, there is renewed belief at the Emirates Stadium this season.

"There's been a little bit of negative media (coverage) regarding Arsenal not winning things over the years, but the whole way through that, since I've been at the club, we've always believed that it will happen soon," midfielder Alex Oxlade-Chamberlain told journalists this week.

"So the fact it did happen (winning the FA Cup), I don't know if it was a relief, but it was just a really nice reward for the hard work and the togetherness that we've had to show for a little while.

"It does start winning momentum and once you know you can win a competition like that, it gives you confidence to go into games and into competitions thinking you can win and expecting to go far."

Sunday's encounter in the traditional curtain-raiser to the English season has been given an edge by Wenger's decision to publicly query City's conduct during the close-season transfer window.

He then appeared to suggest that City had illegally opened talks with new signing Bacary Sagna, the French right-back, while he was still an Arsenal player.

His comments were dismissed by City manager Manuel Pellegrini, who said: "I think as managers, we have enough problems with our own teams to be talking about other teams."

In any case, neither Lampard nor Sagna will be involved on Sunday, as they are among eight City players who are still working their way back to full fitness ahead of the start of the league season on August 16.

Sergio Aguero, Pablo Zabaleta, Martin Demichelis, Fernandinho and captain Vincent Kompany are unavailable due to their involvement in the latter stages of the World Cup.

Spanish striker Alvaro Negredo is sidelined with an injury, but new arrivals Willy Caballero, the Argentine goalkeeper, and Fernando, the Brazilian holding midfielder, could feature.

Arsenal's trio of German World Cup winners -- Per Mertesacker, Mesut Ozil and Lukas Podolski -- will not feature as they are also some way short of fitness.

City face an exacting start to the season, with games against Liverpool, Arsenal and Chelsea in the campaign's early weeks, and midfielder Yaya Toure says that Sunday's game will provide a timely gauge of their preparedness.

"It's a really interesting way to start the season, the Community Shield, against a top team like Arsenal at Wembley," the Ivorian powerhouse told City's official website.

"Even though we have only just started to train together as a full squad, we will be ready.

"It's not just the Community Shield either -- our first five or six games are looking really difficult for us, but that makes it exciting and it means that we have to hit the ground running and have a strong start."

The game will see vanishing spray -- deployed by referees to keep the defensive wall 10 yards back at free-kicks -- used in English football for the first time.