Arsenal have no reason to fear Bayern test says Wenger 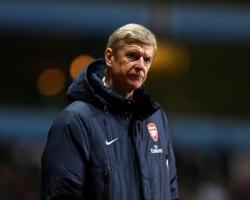 Just 12 months after they crashed out of Europe's elite club competition at the hands of the German giants, Wenger's team have an opportunity for revenge after being drawn to face Bayern at the same stage.

Arsenal were outclassed in the first leg last season as Bayern, who were then managed by Jupp Heynckes, cruised to a 3-1 victory in north London.

But the Gunners responded with a shock 2-0 win in the return game and came close to competing a stunning fightback before bowing out on away goals.

Winning in Munich proved a major boost for Wenger's side, who had lost their way at that time but finished the season strongly and have maintained their impressive form for much of the current campaign.

Yet Bayern, now coached by former Barcelona boss Pep Guardiola, are arguably an even more formidable force this season than they were last year, when they won the Champions League, Bundesliga and German Cup.

The Bavarians will swagger into the Emirates Stadium on a 46-match unbeaten run in the Bundesliga.

They lead the German top-flight by 16 points, allowing them to focus fully on retaining the Champions League crown they won against Borussia Dortmund at Wembley last year.

But Wenger remains optimistic and the Gunners manager is confident the experience of last season's encounters will stand his players in good stead as they seek to end Bayern's reign as holders.

"I think we know them better, individually the players," he said.

"We will be in a better condition hopefully, because last year was after the disappointment of losing against Blackburn in the FA Cup, to play Bayern three days later it was very difficult for us.

Now we are mentally better prepared to go into a game of that stature."

While Bayern have swept aside all challengers under Heynckes and now Guardiola, Arsenal's trophy drought has stretched into a ninth year.

Still, the Gunners' French midfielder Mathieu Flamini sees no reason for his team-mates to go into the tie with an inferiority complex.

Citing Sunday's gritty 2-1 FA Cup fifth round win over Liverpool as proof of Arsenal's improved spirit and mental strength, Flamini said: "What I will say about this season is that I see a great commitment, I see everyone working very hard on the pitch and helping each other.

"We know it won't be an easy game because Bayern are a very strong team, but we are Arsenal, we have big ambitions.

"We will do everything to qualify for the next round in the Champions League."

Arsenal will be without suspended Spanish midfielder Mikel Arteta, but Bayern have more significant absentees.

Even those injuries are unlikely to perturb Guardiola, whose side are respectful of the dangers posed by Arsenal without being intimidated by the Premier League team.

"We're not going there for a 0-0 draw, we want to win in London, of course," Bayern captain Philipp Lahm said.

"It won't be easy, they have put some confidence back in the tank after the Liverpool result."

Centre-back Jerome Boateng believes Arsenal are "stronger" than last season and he claimed Mesut Ozil has added an extra menace to their attacking play, even though the Germany international has endured an up and down first season in English football.

"Mesut Ozil is their key player and we have to be wide awake," Boateng said.

"We have to prove on the pitch that we are better

We don't want to go into the return match chasing a result."