Arsenal hope to turn tables on Barcelona in Champions League 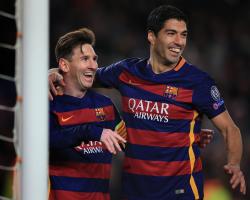 The Gunners, who memorably reached the knockout stages with victory at Olympiacos last week, were handed arguably the toughest task when they were paired with the holders in the draw for the next round.

They will need to overcome their own poor record against the Catalans, having been well beaten by them in the 2006 final as well as being thrashed in the knockout stages in 2010 and 2011.

Arsenal secretary David Miles told Sky Sports News: "If you ask Arsenal fans, this is probably the tie we least wanted against Barcelona.

"The last few times we've played them they've always had the upperhand, so maybe this is the right time to turn the tables and beat them."

Premier League rivals Chelsea, who have had a tough start to the season, were also handed a difficult assignment as they were paired with Paris Saint-Germain for the third year in succession.

Chelsea beat PSG en route to the 2014 semi-finals but lost to them in March in a last-16 tie overshadowed by a racist inicident involving fans on the Paris Metro.

Club secretary David Barnard said: "At least we know a lot about PSG

Their form is very good in the French league and ours isn't as it should be in the Premier League, but this is a knockout game and it is what happens over the two legs.

"I don't think current league form will come into play."

Manchester City, who drew Dynamo Kiev, will be pleased to have avoided the French giants, who did look the most dangerous of the sides to have qualified as group runners-up.

The match will be the second of two Kiev have been ordered to play behind closed doors because of the misconduct of their supporters, including racist chanting.

City director of football Txiki Begiristain said: "It's going to be difficult for us but the most important thing is that we show we're improving in this competition and we'll fight to get to the quarters."

City last faced Kiev in the Europa League in 2011 in a tie best remembered for the involvement of Mario Balotelli, who suffered an allergic reaction to grass in the first leg and was sent off in the second.

In other ties, Bayern Munich were drawn against Juventus and Real Madrid were also paired with Italian opposition in Roma

Wolfsburg and PSV Eindhoven, the two sides to qualify at Manchester United's expense, were paired with Ghent and Atletico Madrid respectively.

They will face Danish champions FC Midtjylland in the second-tier competition.

Tottenham were handed a rematch against the side that beat them last season, Serie A high-flyers Fiorentina while Jurgen Klopp's Liverpool will face German opposition in Augsburg.