Arsenal in search of derby delight despite Sanchez setback 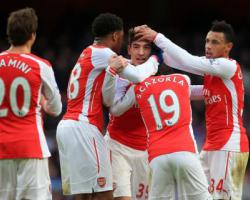 Sanchez has been ruled out of Saturday's trip to White Hart Lane after failing to recover from the hamstring that kept him out of Arsenal's comfortable 5-0 victory over Aston Villa last weekend.

The loss of the Chile forward is a blow to Arsene Wenger's side as they attempt to repeat their success in last season's corresponding fixture in March.

While Arsenal make the short journey to the home of their nearest neighbours and fiercest rivals full of confidence after an impressive recent run, Spurs are also heading into the game in good form.

But the Germany international believes the key will be whether Arsenal can maintain their defensive solidity that has produced four clean-sheets in their last five games and left them level on points with fourth-placed Southampton heading into this weekend's round of Premier League fixtures.

"We know from recent years that defensive unity is vital especially against our north London rivals, so we have to be really cautious on the defensive front," Mertesacker said.

"We did very well last season, as we scored very early and then defended well until the end, so it's going to be the target for this year."

Arsenal have reacted well to the New Year's Day defeat by Southampton and their sequence of victories have moved the Emirates Stadium club back to the brink of the top four and in the fifth round of the FA Cup.

Only goal difference is keeping Arsenal out of the Champions League places at present, with Tottenham one place and two points behind.

The loss of Sanchez will be partly eased by the return of Danny Welbeck to the squad for the first time since the former Manchester United forward featured in the victory over West Ham in late December.

Arsenal manager Wenger said: "The latest is that Alexis is not ready

He is not far away, the Leicester game is a possibility

He is of course very difficult to keep quiet! He is training but it's light training.

"Welbeck is back in the group," the Frenchman added

"Apart from that we have the same squad available as last week."

Tottenham's build-up to the match has been overshadowed by a row over the future of striker Emmanuel Adebayor.

Adebayor has found himself out of Pochettino's line-up but the manager is happy to put the uncertainty surrounding the future of the forward and a number of other fringe players behind him.

"Always when the window arrives always different situations and different things happen, but now it is good because it's finished and we all need to be focused to try to help the team," said Spurs boss Pochettino.

"The players are focused and try to help," the Argentinian added

We have a very good squad."

The future of Paris Saint-Germain and Real Madrid target Hugo Lloris has also been questioned but Pochettino is convinced the France goalkeeper will stay with Spurs.

"Hugo is happy here with us," he said

He is very happy

"He is happy here and maybe in the future, in his mind, he is playing in the Champions League with Tottenham."