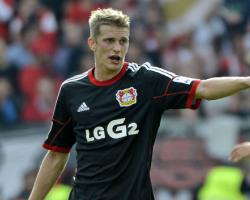 The 26-year-old German has been with Bayer Leverkusen since 2009, making 163 league appearances

Bender can play in a central or defensive midfield role but Wenger is interested in bringing in a player to provide further strength to the teams defensive credentials says the report.

The player made 26 appearances for Leverkusen in the 2014-15 season making him one of the most active and effective in the league.

Lars Bender has been linked with a number of Premier League clubs, including Man United, City and Liverpool but it seems that Wenger is now compelled to act and make an ÃÂ£18m bid for the player

Bender is seen as an ideal candidate having made valuable interceptions and blocks for Leverkusen.

The report also links the Gunners with a number of alternative candidates such as MonacoÃâs Geoffery Kondogbia and Victor Wanayama from Southampton.