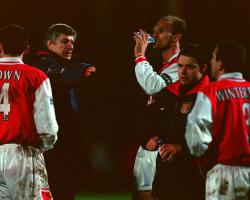 Arsene Wenger's Arsenal face the indifferent Manchester City at a likely hostile Emirates on Sunday, with the Gunners claiming just two wins in their last six matches, both coming against non-league sides

Time's are tough for Arsene, with fans turning on the Frenchman in a way that's not previously been seen during his tenure.

Arsenal and England Kenny Sansom recalls how Wenger made a great start to life in North London club, with the famous five at the back being the bedrock of his almost instant success.

"Arsene Wenger had great success at the start and was lucky to have had that Famous Back Five with David Seaman, Lee Dixon at right back, Tony Adams, Martin Keown and Nigel Winterburn who took my place.

"It was a fantastic side, all very good talkers, and all English.

"Its changed slightly, the last few years havenÃât won to many trophies after that great start he had."

Sansom was speaking in an exclusive promotional video for the Kenny Sansom Life Story event, set to take place at the Sanctum Soho Hotel cinema at a private VIP Ãâred carpet premiereÃâ screening on Friday April 7th and Friday April 28th - where some of the audience will include a number of ArsenalÃâs greatest ever legends.