Arsenal likely to make do and mend 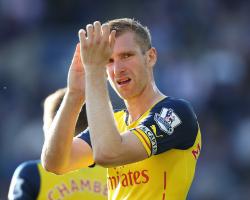 The Gunners drew 1-1 at Leicester on Sunday to at least maintain their unbeaten start to the new campaign, which also saw them overcome Besiktas and secure a place in the group stages of the Champions League

Manager Arsene Wenger flew to Rome on Monday to take part in the 'Match for Peace', which aims to promote religious harmony, and it is understood the club may well have decided against pushing through any late transfer moves, with chief executive Ivan Gazidis and negotiator Dick Law on hand in London for any late moves.

There were no shortage of players being linked with the club

Press Association Sport understands the club were approached about the possibility of bringing in Toronto FC's Jermain Defoe, the former Tottenham striker, on loan, but did not express an interest despite needing cover for injured forward Olivier Giroud, out until January with a broken foot.

It is expected 21-year-old Spanish defender Ignasi Miquel will complete a Â£1.5million switch to Norwich

Should no new signings materialise over the closing hours of the transfer window, then Wenger will leave his faith in the players already assembled.

Centre-back Mertesacker, who retired from Germany duty after the World Cup, is confident the Gunners can move forwards this season, following five matches in the space of 16 days.

Speaking to Arsenal Player, he said: "We have to take this draw and after three games and five points, it is just okay for us to start like that.

"We went through to the Champions League group stage and had two away games so five points.

"I think we have to regroup and come back after the international break."

Arsenal have most of the first-team squad away over the next two weeks.

Midfielder Mesut Ozil has already been ruled out of Germany's friendly against Argentina because of an ankle injury.