Arsenal look to defy the odds in Europe 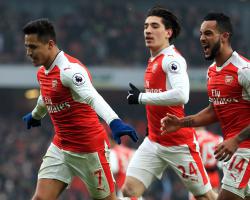 tch between two of EuropeÃâs giants.

Almost five years ago to the day, Arsenal lined up at home to AC Milan looking to overturn a four goal first leg deficit ironically it was the last time Arsenal had won their Group and they were again handed the nightmare draw of that yearÃâs R16

By half time came around goals from Kolcielny, Rosicky and van Persie had the Emirates rocking, but it was all in vain as the Italians shut up shop in the second half and went through 4-3 on aggregate.

So what chance this time, in short, very little! The bookies have them out at 25/1 to progress with Bayern at just 1/100 to make it to the Quarter Finals yet again

To put that in context, tomorrow evening a 4-0 win at Camp Nou for Barca against PSG will only get them a chance in the penalty lottery, yet they are quoted at only 9/1 for ultimate victory whilst PSG are as ÃâlowÃâ as 1/16 to be in the hat for next weekÃâs draw.