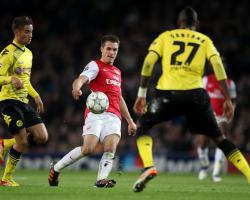 AFP Sports takes a look at all the fixtures in Groups A, B, C and D on Tuesday:

Under previous coach Antonio Conte, Juventus failed to reproduce their dominant domestic form in Europe so Massimiliano Allegri will know the importance of beginning with a win against Malmo in Turin

The Italian champions, who will be without injured midfielder Arturo Vidal, are fresh from beating Udinese 2-0 on Saturday

Swedish champions Malmo were beaten European Cup finalists in 1979, losing to Nottingham Forest, but this is their first appearance in the Champions League group stage

Age Hareide's side won three qualifying ties to get here.

Arda Turan was the match-winner at the Bernabeu and is expected to start for the first time this season, while Italian international Alessio Cerci could make his debut

Olympiakos, who reached the last 16 last season under former Real Madrid and Spain star Michel, are unbeaten so far this season.

Five-time European champions Liverpool mark their return to the Champions League for the first time since 2009 at home to the Bulgarian champions, who are making their group stage debut

Ludogorets produced the sensation of the play-off round by beating Steaua Bucharest 6-5 on penalties, with Romanian defender Cosmin Moti saving two spot-kicks after goalkeeper Vladislav Stoyanov had been sent off

Stoyanov will therefore be suspended for the trip to Anfield.

Carlo Ancelotti's reigning European champions will be looking forward to the distraction of the Champions League after a poor start to the season domestically, with Saturday's 2-1 loss to Atletico in the Madrid derby their second in three games in La Liga

Ancelotti has yet to find a balance to his side following the summer arrivals of Toni Kroos and James Rodriguez, while goalkeeper and captain Iker Casillas's place in the team has been the subject of intense scrutiny.

Since then, Portuguese Paulo Sousa has replaced Murat Yakin as coach.

The Portuguese was a nemesis for Benfica during his highly successful season in charge of Porto in 2010/11 and he has enjoyed a fine start to this campaign with Zenit, winning 10 games in a row in all competitions

Benfica are also undefeated so far this season, the Brazilian Talisca scoring a hat-trick in Friday's 5-0 win at Vitoria Setubal.

When they finished second in Ligue 1 last season, Monaco looked capable of going on to be a force to be reckoned with in Europe, but James Rodriguez, Radamel Falcao and other stars left over the summer without being replaced and Leonardo Jardim's side are in the relegation zone at home ahead of their meeting with early Bundesliga leaders Bayer Leverkusen

Roger Schmidt's visitors are without captain Simon Rolfes for the trip to the principality but Lars Bender is fit again and South Korea's Heung-Min Son is likely to start after scoring as a substitute in Friday's 3-3 draw with Werder Bremen.

Last time around, the German giants won 2-1 in London, but an Aaron Ramsey goal handed the Gunners a 1-0 victory at the Signal Iduna Park

Arsene Wenger's side will be looking for a repeat performance here that would extend their unbeaten start to the campaign, although they must do without the injured Mathieu Debuchy

They will need the Japanese star to perform again, especially with numerous players currently missing, including Marco Reus and captain Mats Hummels.

Turkish giants Galatasaray entertain Anderlecht looking for a better start to this season's Champions League than 12 months ago, when they were thumped 6-1 by Real Madrid in Istanbul

Now coached by former Italy boss Cesare Prandelli, Gala should do better against Anderlecht, even if the Belgian champions are so far unbeaten this season

They have finished bottom in their last seven group stage campaigns.