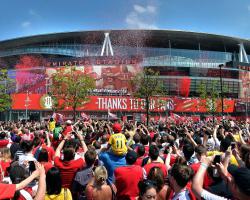 The Premier League giants had applied to double the number of music concerts from three to six at its north London stadium.

Islington Council rejected the application and a planning inspector dismissed the club's appeal in January this year.

Arsenal argued at the High Court that there was a "clear error" in the decision-making process.

But its case was rejected today by Mr Justice Cranston, who delivered his judgement in London, ruling that there had been no error of law.

Opponents have voiced concerns over noise and rowdy music fans

Concerts featuring Bruce Springsteen, Coldplay and Muse have generated hundreds of thousands of pounds in extra revenue for the club

The inspector said that if Arsenal could afford to buy a player like midfielder Mesut Ozil for ÃÂ£43 million from Real Madrid, it could not plead poverty

At a recent hearing, Dan Kolinsky, representing the club, argued before Mr Justice Cranston that the inspector's decision was legally flawed and should not be allowed to stand.

Applying for judicial review, Mr Kolinksy submitted that the inspector had failed to apply the law correctly when he decided the proposal to double the number of concerts "did not accord with the development plan" for the stadium.

During the public inquiry run by the inspector, Arsenal chief executive director Ken Friar said the club needed the money from the gigs to perform in the extremely competitive world of football, citing Manchester United's profits at Â£100 million compared to Arsenal's Â£20 million.