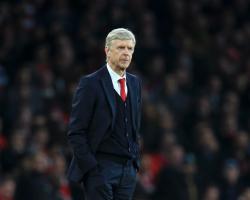 League leaders Leicester travel to the Emirates Stadium for a top of the table clash, with the game moved to noon for television coverage.

The late change has infuriated a number of Foxes fans and some now plan to enter the stadium five minutes after kick-off in protest - citing lost money on travel and accommodation that was booked before the alteration.

Their battle has been backed by Arsenal supporters' group REDaction - who have called on home fans to support Leicester' protest by applauding them into the ground - and comes against a growing discontent from Premier League supporters against high ticket prices.

"You want everybody there when the game starts," the Arsenal boss said when asked if he would be disappointed if fans came in late.

"For me, the game is a joy and everyone has to be part of it

You can protest before and after, but during the game, you want everybody to be there.

Football is a moment of happiness in your life, so don't miss it."

While Leicester are more concerned with the power of television companies to alter kick-off times rather than the cost of their ticket for the game in north London, their protest will come against a backdrop of fan groups battling against rising admission.

Liverpool fans walked out of their draw with Sunderland last weekend after 77 minutes, causing the club's owners to change their plans for a ÃÂ£77 match ticket from next season.

Arsenal themselves back-tracked a week ago after initially announcing a surcharge for season ticket holders for next year to cover the cost of their ticket for the forthcoming Champions League tie with Barcelona.

But Wenger defended the Premier League's ticketing structure on the whole and said Arsenal do not have a "massive problem" despite having both the most expensive season ticket and matchday ticket in the league.

"It is a very complicated subject," he said when asked for his latest views on the ongoing row over ticketing.

"How do you decide what is the right level of ticket prices? First of all (you look at) your attendance and then you are being compared many times to foreign clubs.

For example, Bayern Munich paid one Euro for their ground whereas we paid ÃÂ£128million for our ground.

We pay absolutely everything ourselves so we have to generate more revenue.

"It is true we get more television income, that is down to the audience and success but you know as well that it is down to the pressure of the market to pay for the players with a higher price - and our expenses will come up straight away to increase their wages.

I looked at the comparisons, our cheapest prices are cheaper than anywhere in London.

I don't think that we have a massive problem on that front."

Wenger also feels any similar fan protest during Sunday's game would not affect his side - with many suggesting Liverpool's players negatively reacted to the mass Anfield walk-out as they let a two-goal lead slip.

"I wouldn't like to use that as an excuse," Wenger added.

"I think, once the players are on the pitch, they are focused other job.

"When you play football sometimes, I didn't even know if it rained or not during the game because you're so 'in' the game that you do not focus too much on what is happening in the stands."