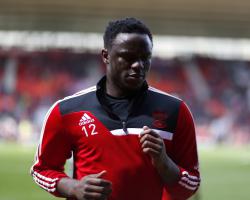 He previously revealed that Wenger would like to bring him to FA Cup winners Arsenal during an interview with the Sun (subscription required):

This time, in an interview with a Kenyan TV show, the 23-year-old talks about Arsenal and how Southampton have the final say on any move away from Saints:

ÃâIt would be nice to move to Arsenal.

ÃâAt this moment, such decisions can only be made by Southampton and that is where my concentration as a player is.Ãâ

The defensive midfielder was a target for the Gunners before his ÃÂ£12million move to Southampton from Celtic in 2013, and these latest quotes appear to suggest that Wanyama - now rated at ÃÂ£20million - would like the Gunners to take another look at acquiring his services.