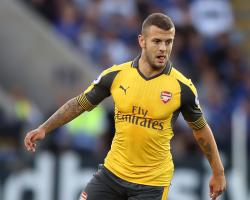 The 24-year-old has been limited to two substitute appearances for the Gunners so far this season and it is believed a temporary move has been mutually agreed between player and club.

It is currently unclear where Wilshere, who missed out on Sam Allardyce's first England squad, may go.

But he is sure to have plenty of options as the transfer window comes towards a close - and a switch within England has not been discounted.

Wilshere made his Arsenal debut against Blackburn in 2008 and soon afterwards became only the fifth 16-year-old to play in the Champions League.

An England debut followed at 18, but since then a succession of injuries have limited Wilshere to 159 Gunners appearances and 34 caps for his country.

Roy Hodgson selected Wilshere for Euro 2016 despite a broken leg decimating his 2015-16 season and restricting him to one Arsenal start, but Allardyce has already made it clear he is unlikely to be so forgiving.

"Hopefully he will get that in the future at Arsenal.

"If Jack Wilshere was playing every week for Arsenal he would be in the squad, but unfortunately he isn't

It is game time for him and it has been few and far between because he has had too many injuries unfortunately.

"It is a question of game time and the contribution he is making to Arsenal and he is not doing that at the moment, so I left him out."

Wilshere's return to fitness for the new campaign has coincided with Santi Cazorla - out injured for much of last term - becoming available again to Arsenal manager Arsene Wenger.

Wenger recruited Switzerland's Granit Xhaka over the summer to bolster his options in the middle of the park, and with Mesut Ozil, Aaron Ramsey, Mohamed Elneny, Francis Coquelin and Alex Oxlade-Chamberlain also competing for places, Wilshere has found himself down the pecking order.