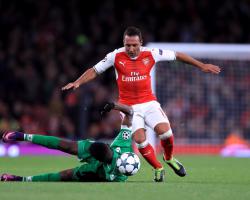 The 32-year-old has not featured since being forced off during the second half of Arsenal's 6-0 Champions League group win against Ludogorets on October 19.

Following an operation on the plantaris tendon in the Spain international's right foot, the Premier League club expected his rehabilitation to take around three months

However, Press Association Sport understands Cazorla is not set to recovery in time to be involved again this season

"The dressing room needs a balance between experience and youth-team players and you need to be guided as well by some experienced players as well when you go through difficult times," Wenger said

"They help you always to keep your feet on the ground and keep focused."