Arsenal miss out with Manolas set for Roma switch 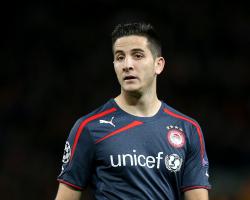 Media reports in Italy claim the 23-year-old centre-back arrived in Rome's Fiumincino airport from Athens on Tuesday morning and will undergo a medical later in the day.

Roma have reportedly agreed a 13million euros (ÃÂ£10.4million) transfer fee with Olympiacos for the highly-rated defender, who still has two years left in his contract with the Greek giants.

Manolas, who played four games at the World Cup for Greece this summer, attracted the attention of top European clubs, including Arsenal, following a solid 2013-14 campaign with Olympiacos

He made 25 league appearances last season and scored three goals while he also featured in seven Champions League games for the Piraeus-based club.