Arsenal Must Drop the Misfiring Alexandre Lacazette to Save Their Season

Arsenal sit 10th in the Premier League. Tenth. Despite marked improvement under Mikel Arteta, the Gunners are struggling to score goals and win games. One man in particular has been underperforming for some time now - might it be time to remove Alexandre Lacazette from the lineup?

Cast your eyes back (if you can bear it) to the final stretch of the Arsenal's 2018/19 campaign. Amid While ​Aubameyang's scoring record has been nothing short of extraordinary since his arrival from Borussia Dortmund two years ago, Lacazette's influence has, if anything, has grown  stronger

Fast forward to February 2020, and the feelings around Lacazette couldn't be less comparable. He finds himself in the most troublesome period of his Arsenal career to date. The 28-year-old is without a first-team goal since mid-December, and hasn't scored away from the Emirates for over a year.

Another away game in the league without a goal for Lacazette - He's now gone 358 days since scoring at Huddersfield.

Thoughts from Turf Moor on yet another draw for Arsenal and the big decision that Arteta faces after the mid-season break https://t.co/bBFI4FzrEg

And yet Mikel Arteta's faith remains unwaveringly strong in his centre forward. He has started eight of the Spaniard's first nine games in charge, but in terms of direct goalscoring contributions, he has just one assist to his name. In this period, Arsenal have won just one of eight in the league, scoring just eight times.

Despite evidence of defensive improvement, the Gunners are struggling in the final third. Since Arteta took over, his side have produced just 67 shots in the Premier League - only Sheffield United (66), and Crystal Palace (60) have managed fewer.

Ordinarily, Lacazette's troubles could be offset by the positive contribution his game brings the team, not just in terms of goals and assists. But the misfiring forward is beginning to look like a man who is totally bereft of confidence, incapable of playing his way into form.

He’s one of those players who helps others around him thrive & score. Think he’s getting a tough ride.

Arteta has persevered with the Frenchman, understandably. Yet with no sign of an upturn in fortunes, there is now a strong case to be made that Arsenal may be better off without him spearheading their attack.

The 28-year-old's removal from the starting XI would allow top-marksman Aubameyang to move into his favoured central role, which would then free up the left-flank for ​the impressive Gabriel Martinelli, who has directly contributed towards 14 goals in just 23 appearances in all competitions.

​Against Burnley, with Lacazette starting centrally, Aubameyang returned to the starting XI on the left-wing, and Martinelli was shifted across to the right. Both wide-men looked uncomfortable at Turf Moor. Then there is a certain Nicolas Pepe, Arsenal's £72m record-signing, who was dropped to the bench. Though it looked as though the Ivorian was finally settling into his stride, he was the man ​sacrificed on Sunday.

After an overall ineffective attacking performance in which Lacazette and Aubameyang were guilty of missing glaring opportunities, perhaps it is time for Arteta to try an attacking triumvirate of Pepe, Aubameyang, and Martinelli lining up in their favoured attacking positions.

With Lacazette now struggling to produce even the basic strengths of his game, Arsenal cannot afford to continue playing him at the expense of Pepe, the club's record-transfer who they simply must see come good. 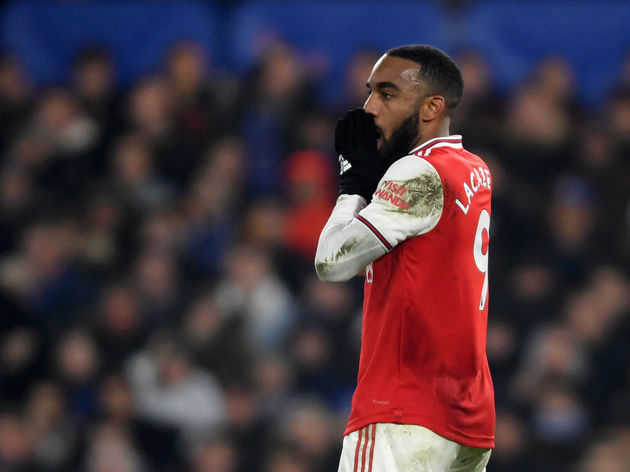 For Arsenal's number nine, he was offered the chance to play his way through this slump of form. Even without goals and assists, he ticked other boxes during this period. But Arteta and his side desperately need to start winning.

It looks as if Lacazette is, short-term, no longer the man. With a look to the future, the Frenchman finds himself, along with Aubameyang, in the last 18 months of his contract. Even though Lacazette is the younger of the two, it is more likely the Gabon international leaves this summer.

But if Lacazette fails to rediscover his form and step up to the goal-scoring plate, will Arsenal have a decision to make come the summer? Could they end up sanctioning the sale of both of their star-forwards, given the prospect of ​Champions League football looks increasingly more uncertain?

Mikel Arteta is reportedly planning a major overhaul of his #AFC squad.

Pierre-Emerick Aubameyang, Alexandre Lacazette and Mesut Ozil could all be up for sale.

One thing's for sure - ​Arsenal could very much do with an in-form, firing Lacazette right about now.