​Arsenal are believed to be open to using striker Alexandre Lacazette as part of their bid to sign Atlético Madrid midfielder Thomas Partey this summer.

Lacazette, who has managed nine goals and three assists in all competitions this season, has ​fallen down the pecking order at the Emirates Stadium and is thought to be nearing the exit door this summer. ​Atlético are keen on landing ​Lacazette as they look to improve their strike force and, according to ​The Sun, ​Arsenal are happy to take advantage of that interest by using the Frenchman in their bid for Partey.

The report states that finding a new defensive midfielder is manager Mikel Arteta's top priority for the summer, and Partey's release clause of around €50m has moved him to the top of the Spaniard's wish list.

Partey still has three years on his contract, but Atlético are trying to tie him down to fresh terms with a considerably higher release clause, although an agreement is yet to be reached. 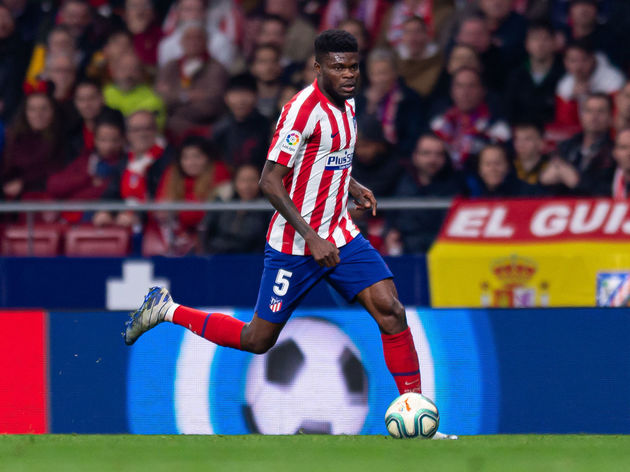 While he still remains affordable, it is believed that both ​Manchester United and ​Inter are interested in striking a deal for Partey, but Arsenal may have the advantage as they are able to offer Lacazette in exchange.

The Gunners are not expected to have a large transfer kitty this summer, with the coronavirus crisis taking a toll on their already-limited budget, so the chance to save money by offloading Lacazette could be too good to turn down.

However, Atlético would only be interested in Lacazette if they can offload Diego Costa, although that is not expected to be a major problem for ​Diego Simeone's side.

Partey has made no secret of his desire to remain at Atlético and even retire at the club, but he also admitted that 'things change and everything can happen', suggesting he is keeping an open mind about the future.

If Arsenal do miss out on Partey, there are a few other options in their sights. Espanyol's Marc Roca as been suggested, while Le Havre youngster Pape Gueye was also touted as a likely candidate earlier this year.