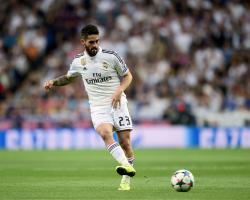 The 23-year-old moved from Malaga to Real Madrid in 2013 for a fee believed to be around ÃÂ£22million and although the player is still highly regarded at Madrid, a lack of playing-time has made the Spanish international reassess his future at the ten time European champions.

One possible destination, should Isco decide to leave Madrid, is Arsenal

Arsene Wenger is believed to be an admirer of the players quick feet and talkSPORT go as far as saying the Gunners boss sent club scouts to watch the player a number of weeks ago.

The playmaker has also been linked with a move to Premier League side Manchester City, with Manuel Pellegrini overseeing Isco's rise during his time at Malaga

City are ready to bid ÃÂ£32million to bring the player to the Etihad, meaning Arsenal have a fight on their hands if they're to acquire the Real Madrid man's signature.