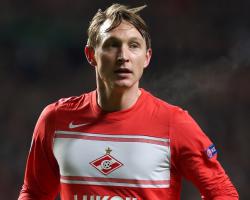 The 31-year-old has made 108 international appearances for Sweden and played more than 400 club matches during spells in his homeland, France and Russia.

Kallstrom will now add England to that list, having joined the north Londoners on a loan until the end of the campaign.

"Arsenal is an amazing club with a lot of great players and a coach who has done really well here for a long time," Kallstrom told Arsenal Media.

"I am so pleased to come here to learn as much as possible.

"I'm here to do my best for Arsenal and to help out the team, so we can achieve good results for the last part of the season."

The midfielder spent time with Hacken and Djurgarden before joining French club Rennes and then onto Lyon in 2006, where he won the Ligue 1 title twice as well as two Coupe de France crowns.

Having played at the 2006 World Cup and also three European Championships, he left for Spartak in the summer of 2012 and made 10 appearances this season before the winter break.

Kallstrom is eligible for Arsenal's Champions League campaign and is an addition welcomed by Arsene Wenger.

"Kim Kallstrom is a hugely-experienced player," the Arsenal manager said.

We welcome Kim to Arsenal."