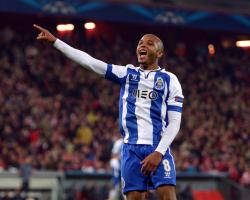 Arsene Wenger's side have been tracking the Algeria international for some time but thought a deal to bring the player to the Emirates was unlikely with Porto keen to keep their Champions League star performer.

However, fresh reports from talkSPORT now say that the Gunners have been cleared to sign the 25-year-old IF they're willing to stump up the ÃÂ£40million sum Porto are asking for.

Sky Italia report that Porto will be trying to create a lucrative bidding war between potential suitors.