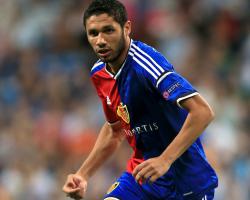 Elneny is expected to offer some much-needed cover in midfield, with the likes of Jack Wilshere and Santi Cazorla still recovering from injury

Arsenal added the deal was "subject to the completion of regulatory processes", but hope Elneny could feature in the squad at Stoke on Sunday

Just when it seemed the Barclays Premier League leaders underlined their title credentials by twice coming from behind to go 3-2 ahead, the visitors conceded an added-time equaliser to Liverpool substitute Joe Allen

The draw allowed Leicester to join Arsenal at the top of the table following a late winner at Tottenham, and represented a missed opportunity to put more ground between themselves and third-placed Manchester City, who were held to a goalless draw by Everton

It left the Arsenal manager frustrated and even the conclusion of the drawn-out transfer of Basle midfielder Elneny, which has been held up by visa paperwork, could not lift his mood

''He has joined us and we will see if he can qualify for Sunday,'' he said.