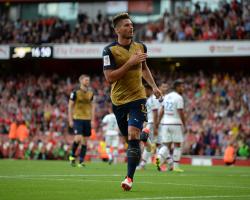 After an even start, the hosts turned the screw on their Ligue 1 opponents with Olivier Giroud, Alex Oxlade-Chamberlain, Alex Iwobi and Aaron Ramsey all hitting the net in an outstanding spell of attacking football, before Mesut Ozil and Santi Cazorla added goals in the second half to wrap up a resounding 6-0 win.

Goalkeeper Petr Cech was only named on the bench by Arsenal boss Arsene Wenger but he still named a strong side, with Iwobi the only untried member of the starting XI, although the nephew of Jay-Jay Okocha looked right at home.

Cech may have been on the bench but his deputy for the afternoon, Emiliano Martinez, proved he can provide competition for the summer arrival.

He did well to beat away Clinton N'Jie's effort as Lyon looked for the early opener, which was the theme of the day's first game as Villarreal beat Wolfsburg 2-1, with all the goals coming in the first 16 minutes.

Arsenal started to take control of the game and Ozil was unlucky as the Germany international danced through the Lyon defence after collecting a long ball forward, only to see his shot cannon off the unwitting Giroud.

The duo combined to better effect moments later as Ozil's free-kick was turned home by Giroud, with the striker scoring off his shoulder despite having his shirt pulled.

The Gunners doubled their lead soon after, this time Oxlade-Chamberlain collected a pass from Giroud after some smart work by Ramsey and drilled a low shot past Anthony Lopes in the Lyon goal.

It got even better for Wenger's side as Iwobi finished off another attack almost from the restart, the teenager striking home Ramsey's pass with aplomb following yet another a free-flowing move.

Iwobi is highly thought of at the Emirates and steered home again eight minutes before the break, only to see his second effort chalked off for offside

However, it was not long before the fourth goal arrived, Ramsey this time hitting the target by drifting in at the front post to sweep home Ozil's cross.

Lyon were clearly shocked but sought-after striker Alexandre Lacazette stung the palms of Martinez as the game approached half-time, with the Argentinian again equal to his effort.

Oxlade-Chamberlain almost continued the scoring run after the break but saw his driven shot deflected away before N'Jie again threatened for the visitors, drilling just wide when played in on goal.

Ozil got the goal his performance deserved as Giroud, who looked offside when receiving the ball, fed the former Real Madrid man, who finished coolly.

A host of second-half substitutions led to a fractured final 30 minutes but there was still time for replacement Cazorla to score with a low free-kick to add a sixth, with Chuba Akpom also hitting the post in an impressive first home outing of the season for the Gunners.