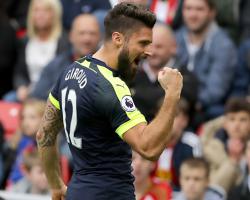 The 30-year-old has yet to start a game for the Gunners this season but is in line to break that run when they face Ludogorets in Bulgaria on Tuesday night looking to seal a safe passage into the knockout rounds of the Champions League.

Giroud came off the bench against Sunderland on Saturday with the game level, and he scored with his first two touches, his maiden goals of the campaign, to help Arsenal keep pace with Manchester City and Liverpool at the top of the Premier League.

But, with Alexis Sanchez also bagging a brace in the 4-1 win and flourishing since being moved into the central striker's position, Giroud's chances could be limited over the course of the campaign.

Despite that, the former Montpellier player feels he will get his opportunity after a frustrating opening to the season as he prepares for his first start, with Arsenal able to qualify if they win in Sofia and Basle fail to beat Paris St Germain in Switzerland.

My time will come," he said.

"Obviously I'd prefer to be on the pitch, but I came back late from the Euros

I was not fit enough to play first and then, unfortunately, after I had an annoying injury I needed to take my time to come back as soon as possible

A niggling toe injury had limited Giroud's minutes, but he did not help himself as he was sent off in the opening Champions League draw at PSG in September.

He has had to watch on as Sanchez has been in scintillating form - but he is currently only concerned about how the team is faring on the pitch, having not lost in any competition since an opening weekend defeat to Liverpool.

"In every big club you have a lot of good strikers, with different qualities," he said.

"We (he and Sanchez) can play together, we can play up front, or on our own

The team is doing very well, from the start of the season.

"I hope to come back and work hard at training

But I'm happy as long as we win

We have a very good team cohesion

I'm not questioning myself too much about my place

I'm focused on the team."

Asked what he must do to win his place back, the France international added: "As I said before, I just need to play and play more

"That's what I try and bring to the team

When I came on against Sunderland I tried to raise the team to come back into the game.

Fortunately, I finished well the work of the team

I feel good on the pitch

There's also a big game on Sunday (against Tottenham)."

That game at home to north London rivals Spurs is why Giroud is likely to start in Sofia on Tuesday, where 5,000 Ludogorets fans are expected to make the 435-mile round-trip from Razgrad to cheer on the Bulgarian champions, with Arsene Wenger set to make several changes.

The Arsenal boss confirmed Nacho Monreal, Theo Walcott, Santi Cazorla and Hector Bellerin have not travelled as all are carrying minor knocks, while Sanchez, Mesut Ozil and Laurent Koscielny could all be handed a rest at the Vasil Levski National Stadium.