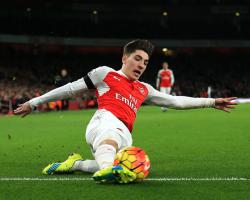 The Gunners beat top-flight rivals Sunderland 3-1 on Saturday in their third-round FA Cup tie as they look to retain the trophy.

Joel Campbell, Aaron Ramsey and Olivier Giroud scored after Jeremain Lens had put the Black Cats into an unexpected lead at the Emirates Stadium.

Arsenal boss Arsene Wenger made five changes for the game, with one eye clearly on Wednesday night's tough Premier League trip to Liverpool.

But his side were still too strong for a Sunderland team also much-changed from their last league outing and full-back Bellerin, who set up goals for Ramsey and Giroud in an impressive display, feels there is enough quality in the Arsenal squad to fight on more than one front.

"That is the goal of the whole team," he said when asked about winning a third straight FA Cup.

We are trying to get the third in a row.

"The legs are fine and we have shown that we have very good players on the bench also and the rotation helps us get good results.

"We have a lot of games and they are all hard games, but we have to respond in the way we did today and I'm sure we will be fine.

"The team was up to the challenge

It is nice to get the three goals and that is confidence for the team as we had a difficult week ahead."

While Arsenal made five alterations to rest key players such as Mesut Ozil for their title push, Sunderland manager Sam Allardyce made seven changes after complaining about the fixture pile-up.

His strugglers face a trip to Swansea on Wednesday night before an early Saturday afternoon kick-off at Tottenham on Saturday.

The most notable of his changes was in goal, where he handed a debut to England Under-21 goalkeeper Jordan Pickford.

Having spent the first half of the season on loan at Preston, Pickford was recalled and drafted in for the game at Arsenal and the local boy was delighted to make his Sunderland bow.

"It was a dream come true as a young lad coming from Washington and a Sunderland fan," he told the club's official website.

"Obviously the result wasn't the best, but from a personal point of view it was the proudest moment of my life, and for my family as well.

The Preston one really helped me

I'm thankful that they took me, I came back and there's nothing better (than) to go and play.

"I didn't feel too nervous

I kind of told myself it was just another game and I had to keep the ball out of the net.

I'll have to carry on working hard in training and keep putting the pressure on."