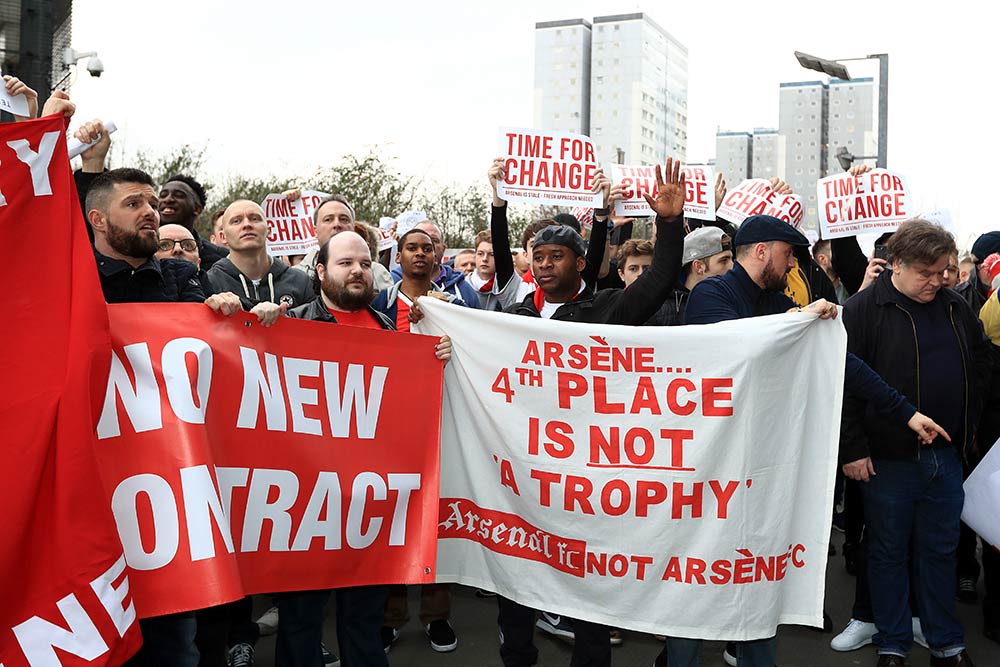 The Arsenal Supporters Trust (AST) canvassed its 1,000 members and 78 per cent of respondents said they have lost faith in the Frenchman.

Wenger has yet to announce whether he will sign a new contract at Arsenal, with his current deal expiring this summer, even though he revealed recently he has made his decision.

Having lost six of their last nine games, the Gunners sit sixth in the Premier League and were humiliated by a 10-2 aggregate loss to Bayern Munich in the Champions League.

That has led to protests against Wenger extending his two-decade tenure as Arsenal boss, with another demonstration planned ahead of Sunday's visit of Manchester City.

AST has not carried out any formal protests of their own but the fact 84 per cent backed Wenger when a similar poll was conducted 18 months ago shows how a large swathe of members have changed their opinion of the 67-year-old.

"The bond between the club's longest-serving manager and the fans has, until recently, remained strong," AST board member Tim Payton told the London Evening Standard.

"Sure, many grew frustrated with aspects of his management and called for change but only now do a majority believe it is time for him to go."

Members were sent a survey which included the question "Do you support Arsene Wenger signing a new contract and remaining as Arsenal manager", to which 78 per cent of respondents said "No" and only 15 per cent said "Yes".

The handling of Wenger's contract situation drew even more negative replies, with 86 per cent responding "No" when asked "Do you think the way that the Arsenal Board have dealt with Arsene Wenger's contract is in the best interests of Arsenal Football Club?"

The results will come as the latest blow to Wenger and the Arsenal board, with neither yet announcing whether the manager will sign a new contract beyond the current campaign.

Wenger said following the 3-1 loss at West Brom a fortnight ago that he had made up his mind and would announce his decision "very soon".

The answer did not come during his pre-match press conference on Thursday morning and he told Sky Sports News on Friday that blaming Arsenal's recent slump on the uncertainty over his future was an "easy excuse".

But one thing that uncertainty is doing is causing unrest among the Arsenal fan base, with some deciding to stay away from matches.

Around 200 fans marched from Highbury to the Emirates Stadium ahead of the recent fixtures against Bayern Munich and Lincoln while two planes were flown over the Hawthorns during the West Brom defeat.

One called for Wenger to leave, while a second proclaimed support for the man who has delivered three Premier League titles and a record-equalling six FA Cups to the club.

A crowdfunding website collecting funds for further protests has raised almost Â£4000 and there has been a number of suggestions on Twitter that tennis balls will be thrown on to the pitch during the game against City.

"Less than three per cent of fans directly called for him to be fired," Payton said.

"Most talked mainly about stepping aside, retirement or succession plan

However, there was a clear overall opinion that the manager's time is at an end.

"These results help explain why there have not been mass demonstrations against the manager and why, despite a consensus on what should happen, there are differing views on how to get there.

"Scores of empty seats at recent games show many find staying away is the best way to articulate their views."