Arsenal: The XI That Should Start Against Sheffield United

A difficult away trip to a tough side on a cold evening is the type of game Arsenal have traditionally struggled with in the past, but i 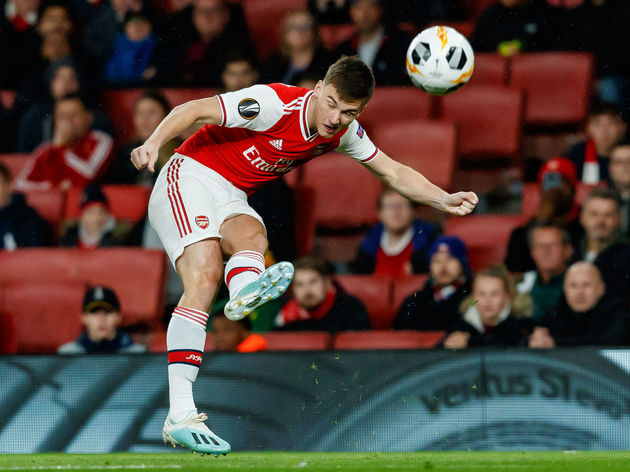 Bernd Leno (GK) - Although Emiliano Martinez's fine Europa League form saw him earn a call-up to the Argentina squad, Bernd Leno remains ​Arsenal's number one. His key save from a Marcus Rashford free kick helped the Gunners gain a point from their last away game against Manchester United. The German will be hoping they can go one better at Bramall Lane

Calum Chambers (RB) - While Hector Bellerin is Arsenal's first choice right back, Monday's fixture might prove a bit too soon for the Spaniard. In his absence, ​Calum Chambers has deputised ably in what is not his most comfortable position, displacing Ainsley Maitland-Niles. He will see the trip to ​Sheffield United as a chance to stake a claim for more first team action.

Rob Holding (CB) - With a goal on his return to first team action after a nine month injury layoff and a further 90 minutes against Standard Liege under his belt, ​Rob Holding is ready to play again in the Premier League. With Arsenal's defence looking very ropy - particularly when playing out from the back - Arsenal fans will be hoping that the Englishman's calm presence will help them to record just their third clean sheet in the league.

David Luiz (CB) - After giving away two penalties in his first three games, ​David Luiz appears to have settled somewhat at Arsenal after signing from ​Chelsea. His experience and winning mentality could be exactly what Arsenal need for a tough game on Monday.

Kieran Tierney (LB) - Speaking in his ​pre-match press conference, Unai Emery confirmed that new signing Kieran Tierney is ready to make his Premier League debut. Gunners fans will be excited to see how their deadline day signing gets on, after an assist and two clean sheets in his first two Arsenal starts. Lucas Torreira (DM) - Anyone who saw Granit Xhaka's ​​comical free-kick routine with former Gunner Stephan Lichtsteiner on international duty will understand why Arsenal fans are so frustrated that their club captain is seemingly undroppable under Unai Emery. What makes things worse is that they have a much better option sitting on the bench. The Uruguayan has oddly been deployed as the most offensive of a midfield three in big games this season, but should be allowed to play in his preferred screening role on Monday.

Matteo Guendouzi (CM) - Voted September player of the month by Arsenal fans, Matteo Guendouzi has stepped up a level from his already impressive debut season this year. The French Under-21 international is showing the maturity and leadership that has most Arsenal fans excited about what else is to come.

Dani Ceballos (CM) - While this type of fixture might not seem like the kind of game for the technical Spaniard to thrive in, Ceballos has a nasty side that means he won't easily be pushed around at Sheffield United. Over the international break he started in a Spanish side blessed with arguably the best midfield talent in the world, and will be key as Arsenal look to control the game. Nicolas Pépé (RW) - Despite admitting that he is ​struggling with his confidence following his record £72m move to Arsenal over the summer, Nicolas Pépé will be hoping that his goal over the international break for the Ivory Coast will be what he needs to kickstart his Gunners career. The spaces that will be left by Sheffield United's overlapping centre backs are made for the Ivorian to run into, meaning that chances should be aplenty. It's up to him to take them.

Alexandre Lacazette (CF) - Back in training after an ankle injury that kept him out for a month, ​Lacazette is something of a doubt. Should he start however, Lacazette will be looking to reignite one of the league's most prolific partnerships with his friend ​Pierre-Emerick Aubameyang.

Pierre-Emerick Aubameyang (LW) - Fresh from yet another goal on international duty with Gabon, Arsenal's top scorer will be hoping to continue his hot streak in front of goal. The Premier League golden boot holder is the most important member of the front three that Arsenal fans have been desperate to see all season. Like Pépé, his searing pace could cause Sheffield United all manner of problems.