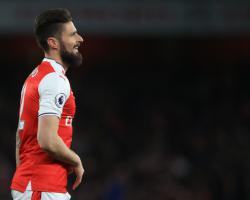 Both sides went into this London derby in dire form but it was the Gunners who addressed that and ultimately ran out comfortable 3-0 victors, marking their first league win since February 11.

After a dull first half, Mesut Ozil marked his 150th Arsenal appearance with a tame opening goal before laying on the second for Theo Walcott

Olivier Giroud came off the bench to score the goal of the night.

Going into the game, the teams had just two league wins between them since the start of February, with Arsenal seven points adrift of the top four at kick-off.

With pockets of home fans staying away until the 13th minute in their latest protest against manager Arsene Wenger - 13 signifying the number of years since they last won the league - it was West Ham who started brighter.

Michail Antonio looked a threat playing further forward down the right and won a free-kick inside 10 minutes which Manuel Lanzini put just over the bar of Emiliano Martinez - Arsenal's third-choice goalkeeper who was deputising with Petr Cech and David Ospina injured.

As the 13th minute arrived and a number of fans took their seats, Hammers skipper Mark Noble angled a low shot wide, with Bilic's men still just about on top.

Walcott, Arsenal's captain for the evening, miscued a shot that brought an easy save out of Darren Randolph before the England forward had a strong penalty claim turned down following a challenge from Arthur Masuaku.

Danny Welbeck had a great chance to open the scoring but failed to make clear contact on a cute Sanchez free-kick when found in front of Randolph's goal.

Welbeck then lashed wide from a tight angle before a lull in the game which lasted almost until half-time, when the hosts finally started to up the tempo.

Hector Bellerin looked set to score, only to see his strike bravely blocked by Jose Fonte, whose defensive partner James Collins then threw himself in the way of Mohamed Elneny's shot.

The resulting corner was headed goalwards by Welbeck but Randolph held the ball, with the Republic of Ireland stopper doing well to smother Walcott as he looked to latch onto a raking pass.

But it was Randolph who would be at fault for Arsenal's opener just before the hour mark as Fonte's poor clearance fell to Ozil, whose strike from the edge of the box squirmed through the grasp of the West Ham goalkeeper.

Randolph was back to his best moments later as Walcott slid in Welbeck, bursting off his line to close down the former Manchester United man.

Welbeck has not scored a goal at the Emirates Stadium for almost 12 months and crashed a shot into the side-netting as Bilic threw on fit-again Diafra Sakho in place of Andy Carroll.

But it would be Arsenal who struck next, making sure of the points as Walcott tucked away Ozil's low cross, with Bellerin missing a sitter shortly after.

Martinez made his first true save with 15 minutes remaining as he kept out Lanzini's drive, before Giroud rounded off the night with a well-struck third.

The result will help lift some of the gloom around the Emirates Stadium as Wenger's future remains uncertain, but it is West Ham's top-flight status which is firmly in the balance.