Arsenal to hijack Gundogan move to Manchester with surprise contact 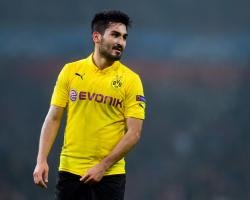 With the Memphis Depay transfer being sewn-up quickly it looked like Gundogan would also be a formality but it appears that Arsenal lead the race to sign the player with Atletico Madrid.

What appears to have concerned Manchester United, City and Bayern Munich is the player's injury record which has cooled interest from the early pace-setters

Arsenal, according to a report in the Mail have made contact with his family with his father acting as his agent but at this stage Borussia Dortmund point out that no bids have yet been lodged for the midfielder.

United are linked (legitimately or not) with a wide range of players including SouthamptonÃâs Clyne and Gareth Bale whilst City seem to be focused on attracting Paul Pogba and Kevin De Bruyne.

The 24-year-old is thought to be worth in the region of ÃÂ£20million.

The midfielder joined Dortmund from Nurnberg in 2011 and has gone on to make 110 appearances in all competitions, scoring 13 goals