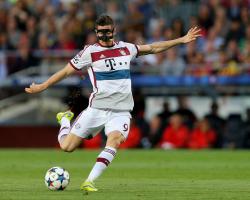 Wenger has hinted - should the opportunity arise - that a big signing could come in before the end of the transfer window, with the Gunners still in need of a truly world class striker.

And now, with Real Madrid reluctant to let French international Benzema leave the Bernabeu, El Confidencial's respected Kike Marin has suggested that Arsenal have made moves to secure a secret 'plan B' option in the form of Robert Lewandowski.

Lewandowski had long been linked with a move to the Premier League before he signed for German giants Bayern Munich on a free last summer, and was most recently touted for a move to Old Trafford with Louis van Gaal's side looking to fill the void left by the departure of Robin van Persie and Radamel Falcao.

The 26-year-old's agent, Cezary Kucharski, recently commented on the speculation surrounding his client, suggesting a move to either England or Spain could be on the cards in the future.

ÃâWith a player of RobertÃâs class, the truth is that not a lot of work is required because really there are only two directions in which he could go in the future, England or Spain, and only with Bayern MunichÃâs acceptance.

ÃâRobert is one of the most valued strikers on the market who guarantees goals, guarantees assists, excitement.

ÃâHe has shown that over many years during his career.

ÃâEvery year he is an even better player and plays at a higher level and that is very important for other clubs because he has credibility and guarantees at least 30 goals a season.Ãâ Kucharski told Polish television.