Arsenal too hot for Mexican opponents in Los Angeles 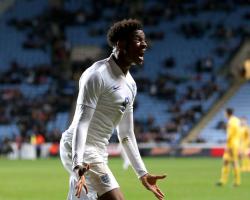 Goals from Rob Holding, Alex Oxlade-Chamberlain and Chuba Akpom had the Gunners in control, before their Mexican opponents pulled a goal back from the penalty spot with 17 minutes remaining.

England Under-21 international Akpom, whose late goal gave Arsenal a 2-1 victory over the MLS All-Stars i n San Jose on Thursday, made it 3-0 six minutes later