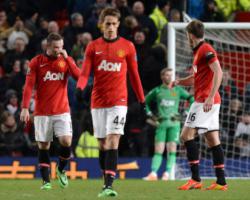 While Arsenal ceded first place to Chelsea after being blown away in a 5-1 defeat at Liverpool on Saturday, United could only record a 2-2 draw at home to Fulham, who had started the game at the foot of the table.

Arsenal's capitulation ended a run of 10 games without defeat in all competitions, but manager Arsene Wenger can at least console himself that it left his side only a point off the summit.

Silver linings are not quite as easy to find for United, who trail fourth-place Liverpool by nine points and therefore seem destined to miss out on a place in next season's Champions League.

The defending champions dominated Sunday's game against Fulham at Old Trafford, enjoying 75 percent of possession and sending no fewer than 81 crosses into the visitors' box.

They would have prevailed had it not been for a 94th-minute equaliser scored by Fulham's Darren Bent, but record signing Juan Mata says that his side must develop a keener cutting edge.

"It seems that luck is not on our side, but I don't like to give excuses," the former Chelsea midfielder wrote on his personal blog on Monday.

"We have to get better and improve our shooting accuracy, because we got many times to the box and could have scored more than two goals.

"I'm sure we will make it, but there are less and less games to play so the sooner the better."

Michael Carrick, who scored United's second goal, said the result was "hard to explain", but he warned that he and his team-mates were desperate to take their frustrations out on Arsenal.

"It's one of those seasons -- setback after setback

We have to believe that with performances, things are going to change.

We still believe we can go there and get the result we want."

United won 1-0 when the sides met at Old Trafford in November and Arsenal have occasionally fallen short against their supposed peers this season.

Although they beat Liverpool and Tottenham Hotspur at home, they dropped points against Everton and Chelsea at the Emirates and were thrashed 6-3 away to Manchester City in mid-December.

Wenger's side currently find themselves amid a daunting run of games, with Sunday's FA Cup tie at home to Liverpool followed by the home leg of their Champions League last 16 tie against reigning champions Bayern Munich.

Midfielder Mikel Arteta has urged his side to channel the frustration from Saturday's result at Anfield, telling his team-mates: "We have to react.

"We know we need to improve and face those games in a different manner because after 18 minutes we were 4-0 down and it was like a car crash.

It was the angriest I have seen him."

Arsenal must once again do without holding midfielder Mathieu Flamini due to suspension, while Aaron Ramsey, Theo Walcott, Abou Diaby and January loan signing Kim Kallstrom remain unavailable due to injury.

United manager David Moyes, meanwhile, may elect to hand teenage winger Adnan Januzaj a start in place of Ashley Young on the left flank, having introduced him from the bench against Fulham.

Moyes said that the draw against Fulham was "as bad as it gets", but he can draw encouragement from United's impressive recent record in away games against Arsenal.

United have lost only twice on their last seven visits to the Emirates, winning three times and drawing twice.

Times have changed since their last trip, however

When United last went to Arsenal, in April last year, it was their first game since winning the Premier League title.