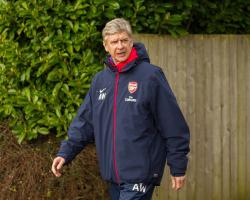 The Barclays Premier League high flyers head into Wednesday night's Champions League last-16 first-leg clash against the German giants on the back of Sunday's 2-1 FA Cup victory over Liverpool, rather than a morale-sapping elimination to lower-league opposition - as was the case in 2013.

The match at the Emirates Stadium takes place 12 months to the day since their 3-1 home loss to Bayern which cost Wenger's men their place in the next round.

Arsenal's home loss gave them a gargantuan task heading to the Allianz Arena, where they won 2-0, but exited the competition on away goals before Bayern went on to lift the trophy at Wembley.

But the Arsenal boss is confident his side are now mentally better prepared to take on the Bundesliga side.

He said: "We are in much better mental shape today than we were one year ago.

This time we won against Liverpool.

"We have a strong team spirit, a strong desire to do well and a united team.

The belief is built by the results.

"On that front we are stronger, of course

We believe we can do it, but that's down to the quality of our performance tomorrow."

Tomas Rosicky replaces suspended midfielder Mikel Arteta in Wenger's matchday squad, which resembles that which beat Liverpool, with Wojciech Szczesny likely to return in goal in place of Lukasz Fabianski.

Jack Wilshere (stiff back), Santi Cazorla (ill), Kieran Gibbs (muscular problem), Bacary Sagna (tired) and Olivier Giroud (tired) are poised to return to the starting XI after taking places on the bench against the Reds.

Bayern may arrive with a new coach in Pep Guardiola, but the approach will be the same, according to Philipp Lahm.

The Bayern captain told fcbayern.de: "We won't be playing for a goalless draw

Obviously we want to win in London.

"Bearing in mind our last result there, we can travel with a lot of confidence.

"We can't wait to get back in (Champions League) action."

Since losing the second leg of their last-16 tie a year ago, only Manchester City have managed to beat Bayern in a competitive match, excluding the DFL-Supercup defeat to Borussia Dortmund last summer.

But Lahm knows Arsenal will be tough opponents as they look to stop the Bavarians becoming the first team to successfully defend their Champions League crown.

"Their confidence will be soaring after they beat Liverpool at the weekend."

Holland international Arjen Robben is looking forward to the match in London after Bayern lifted the trophy in the capital in May.

"It's great to be going back again," said Robben, but on Arsenal he warned: "They've taken a step forward compared with last season."

Bayern will fly to London on Tuesday without Franck Ribery, who has started running once again, but is some way off returning to team training after undergoing surgery on his buttock.

Guardiola is also without Xherdan Shaqiri, who pulled his thigh after scoring two goals in a 4-0 win over Freiburg on Saturday.