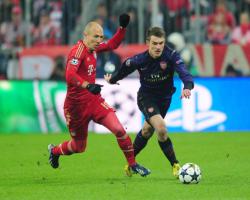 Leading scorers in all competitions:

Arsenal - Second in Premier League, one point behind leaders Chelsea

Bayern Munich - Top of the Bundesliga, unbeaten and 16 points clear of Bayer Leverkusen

Bayern Munich - winners of Group D ahead of Manchester City

Previous meetings: Bayern won on away goals after the sides drew 3-3 on aggregate at the same stage last season