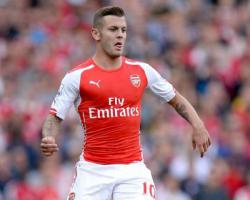 Arsenal V Burnley - view commentary, squad, and statistics of the game live.Wilshere adds to injury woesJack Wilshere has been added to Arsenal's lengthy injury list but Arsene Wenger is hoping to welcome back Olivier Giroud "miles ahead of schedule" in the coming weeks.Wilshere is likely to miss Saturday's Barclays Premier League clash with Burnley at the Emirates Stadium due to a knee problem and is also a doubt to face Anderlecht in midweek.But France striker Giroud, who fractured his foot against Everton in late August, is on course to rejoin training next month despite having initially been ruled out until the New Year."Olivier is miles ahead of schedule

He's doing very well," Wenger said."He's three weeks ahead of schedule and he will join normal training after the international break

Of course it's a big boost."Arsenal have lost Giroud, Laurent Koscielny, Mesut Ozil, David Ospina, Yaya Sanogo, Abou Diaby and Mathieu Debuchy to a variety of ailments and now Wilshere has joined their ranks.Wenger insists the problem is minor and has penciled in the England midfielder to return against Swansea on Sunday week."There is a slight problem with Wilshere

He got a kick on his knee

He's not training at the moment

Certainly Swansea, yes."Arsenal are targeting a third successive victory when they host Burnley with a three-point haul potentially lifting them into the top four.A nine-point gap has opened up on Premier League leaders Chelsea and while Wenger refuses to concede the title race, he knows it will take a sustained assault to make up the ground on Jose Mourinho's team."I don't write us off, let other people do that, but Chelsea are in a strong position at the moment," Wenger said."I believe it would not be realistic to just think now that we'll catch Chelsea very quickly."We have to get consistent results to have a chance of coming back."I'm more focused on the quality of our games and on the consistency of our results before we think about coming back on Chelsea."Burnley have yet to win in nine Premier League starts this season and Wenger is ready for them to adopt defensive tactics at the Emirates Stadium."It's absolutely normal that other teams try to stop us from playing our game

I can understand that completely," Wenger said."We want to be good enough to get around that and not allow other teams to stop us playing."We are good enough, but we know the quality of our passing and our decisions must be better."Burnley have already drawn with Manchester United, and midfielder Scott Arfield hopes being major underdogs can play into his side's hands."There are games that are not in your division," he said."There's a league within a league and then you go through certain games and think that's where you're going to pick up points

But it doesn't always happen like that and that's why you need to look at every game the same."When you go to Arsenal you need to stick to your game plan

We know how good they are and what quality they possess as a team and individually, but I think if we go there and stay compact and stay in the game then you never know what can happen."One of the best moments of Burnley's season came via the boot of Arfield, who put them 1-0 up against Chelsea in the opening game at Turf Moor.The Blues came back to win, and it remains the only time during the campaign so far that the Clarets have been ahead in a game.Arfield has looked one of the most likely sources for goal-shy Burnley, always willing to have a long-range shot with his powerful right foot, and he is desperate to add to his tally."It's one of the aspects that I'm dying to do," he said."Last season I got nine and I was off this season in the first game

If the penalty goes in at Palace, I'd have been up to two already."You get fewer chances than you do in the Championship and when you get them you need to put them away

I think we've been a bit naive at times in front of goal."