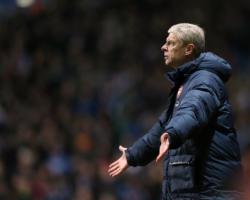 Manager Arsene Wenger feels his current Arsenal side are "in a moment of our lifetime" as the Barclays Premier League leaders look to stay on course in the FA Cup with victory over Coventry on Friday night.


The Gunners take a break from leading the championship race when they host the Sky Bet League 1 outfit in the first of the weekend's televised fourth-round ties.


It has been almost a decade since any of Wenger's squads last tasted trophy success, but the French coach remains ever confident this generation can finally deliver their promise in 2014.


"We have to prepare seriously for this game, because we are on a good run and it will be really not welcome at all not to take this game seriously," Wenger said.


Wenger maintains Arsenal cannot take anything for granted against the Sky Blues - who were thumped 6-1 at the Emirates Stadium in the Capital One Cup last season - with the 1987 FA Cup winners looking to make progress back towards one day regaining their top-flight status following financial struggles which saw them leave their Ricoh Arena home to play in Northampton.


"Football maybe is the only sport which can make it so unpredictable and that is why it is so interesting as well," said Wenger.


"If you have two or three divisions' difference in basketball or rugby, volleyball or handball, you cannot do it, but in football you can."


He said: "It was the first time in 16 years that we lost against lower league opposition in the FA Cup, so that was a great warning.


"At the moment, this is just our next game and we want to win it."


Arsenal will have an extra day to recover ahead of their next Premier League fixture at Southampton on January 28, so Wenger indicated he would not have to rotate so much of his first team.


Denmark forward Nicklas Bendtner could well come back into the starting XI following an ankle injury, while fit-again Alex Oxlade-Chamberlain may feature.


Midfielder Tomas Rosicky, though, will be rested as he has been training in a protective mask since suffering a broken nose at Aston Villa, while Lukasz Fabianski will again be in goal as for the third-round win over Tottenham.


Meanwhile, Coventry captain Carl Baker is confident the Sky Blues will give Arsenal a run for their money in Friday's FA Cup fourth-round meeting at the Emirates Stadium.


Steve Pressley's team head into the tie in good heart after six games unbeaten but they are well aware they will need to produce their best performance in recent memory to dump the Barclays Premier League leaders out of the competition.


"We have been working on a game plan all week and we are going to make it as difficult as possible for them to break us down," Baker told the club's official website.


"We hope to try and keep as much possession as we can, as we understand we might not have as much of the ball as we normally would due to Arsenal's style of play.


"I have a strong belief that we will go down there with our heads held high and make a good account of ourselves. Hopefully we can send the fans away proud."


Leon Clarke will lead the line for Coventry. The wantaway striker remains at the club with manager Steven Pressley claiming there have been no bids for the 28-year-old, who will be looking to put himself further in the shop window in front of the TV cameras on Friday night.


Forward Callum Wilson remains sidelined with a dislocated shoulder but Pressley otherwise expects to have a fully-fit squad.