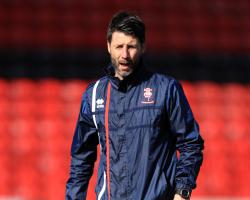 The Red Imps' trip to the Emirates Stadium will pit Danny Cowley's men against the millionaire might of Arsene Wenger's Arsenal.

Here we look at the comparison between the two clubs.

Arsene Wenger moved to Arsenal in 1996 and is now the club's longest-serving and most successful manager, having steered the Gunners to three Premier League titles and six FA Cups during his tenure

His Lincoln counterpart Danny Cowley was still working as a full-time PE teacher when he guided Braintree Town to the National League play-offs last season, but subsequently gave up his second job when he moved to Lincoln.

The Gunners' record signing, ÃÂ£42.5million Mesut Ozil, is expected to line up at the weekend

In contrast Lincoln spent no money on new players in the summer, and their record transfer fee remains the ÃÂ£75,000 paid for both Dean Walling and Tony Battersby in 1997 and 1998 respectively.

In total, Arsenal have won 13 league titles, 12 FA Cups and two League Cups, as well as the European Cup Winners' Cup and the Fairs Cup

Meanwhile, to mark their run to the last eight, a Lincoln business has produced a limited-edition cheese pack

The selection, curated by The Cheese Society, includes "ones from Lincolnshire, imp-related cheeses and any that celebrate the colour red".

It kept the Red imps six points clear of Forest Green and Tranmere, and extended their unbeaten run in all competitions to 10 games

On the same night Arsenal slumped to a 5-1 Champions League defeat to Bayern Munich, crashing out 10-2 on aggregate and heaping more pressure on Wenger, whose contract expires in the summer