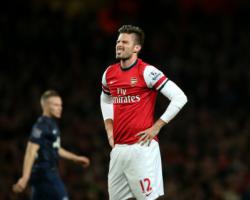 Gnabry ready to take his chanceCombative midfielder Serge Gnabry feels the FA Cup is the perfect opportunity for Arsenal's youngsters to show they have what it takes to hold their own in the first team.Gunners boss Arsene Wenger is expected to rotate his side for Sunday afternoon's fifth-round showdown against Liverpool at the Emirates Stadium, with perhaps one eye on next week's crunch Champions League clash against Bayern Munich.That could mean the likes of striker Olivier Giroud and vice-captain Mikel Arteta are given a breather, which would open the door again for 18-year-old Gnabry - who started both the previous ties against Tottenham and Coventry - to have another chance to impress."I am eager to get back in the team and I'm trying my best in training," German youth international Gnabry said in Arsenal's matchday programme."I am hoping to catch the manager's eye and hoping to get back in the starting XI."The FA Cup is a great opportunity for young players

I really enjoy playing in the competition and I hope we make it to the final."We have got a chance, and it doesn't matter who is still in the cup because in the end you have to play the best teams."I think it is going to be a great game for sure and we just want to make it to the next round."Wenger maintains he will not make too many changes which would compromise the integrity of his side."I play a team with a good opportunity, a good chance to qualify," he said."Will I rest one player, or two or three? I don't know yet

Certainly we will just have one focus, which is to win the game."Wenger insists there can be no thoughts of what happened against Liverpool last weekend, when his team were thrashed 5-1 at Anfield, where they trailed 4-0 inside the opening 20 minutes."You can say what you want, when you just conceded five goals you do not go into the next game and act like nothing happened," said Wenger, whose side drew 0-0 at home to Manchester United on Wednesday."I feel that we got the mental response I expected from the team - hugely committed, but with a bit more confidence and were a bit more composed on the ball."Santi Cazorla is struggling with a virus, but midfielder Mathieu Flamini is available again following a three-match suspension.Liverpool centre-back Daniel Agger's return to fitness could be just the lift his defence needs after their leakiness was exposed in recent weeks.The Reds have kept only two clean sheets against top-flight opposition since mid-December and individual errors have contributed to that disappointing tally

Kolo Toure has been responsible for two mistakes in three matches, gifting an equaliser to West Brom and then scoring an own goal against Fulham in midweek and his place is most under threat from Agger's return to the squad after missing six matches with a calf problem - a spell in which they kept just one clean sheet

"I like defenders to defend first," he said ahead of Sunday's FA Cup fifth-round tie at Arsenal, the team they smashed 5-1 in the league at Anfield last weekend

"Obviously if you have the qualities then we want you to play because it is important how we build our game and there is no doubt Daniel Agger is an outstanding footballer." While Liverpool have dragged themselves into the Premier League title race, sitting just four points off the top in fourth place, Rodgers insists that will not affect their cup preparations

In fact, he believes Arsenal's pending Champions League clash at home to Bayern Munich next week may have more bearing on the fixture

"We want to win the FA Cup, that's our objective," he added

"It's probably different for Arsenal, who have a massive game after ourselves in the Champions League, so they may have to look at it differently

We won't need to rest anybody

"We want to do it for the club

"We want to get to Wembley, not for the semi-final, but for the final

If we're there for the final, then it gives us a chance to win it." Rodgers believes their league form, which has seen them drop just four points in seven matches since the turn of the year, stands them in good stead for a trip to the Emirates

"That was a truly a world-class player," he said

"His pass (for Daniel Sturridge's goal, Liverpool's first equaliser) and his composure at the end showed the team is full of confidence

"We kept probing and passing, trying to find the space and not lumping it into the box playing panic football

"That was pleasing with the calm nature we got the winner."