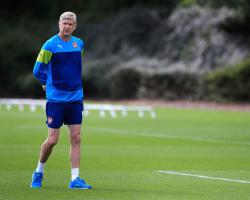 Arsenal V Man City - view commentary, squad, and statistics of the game live.Wenger unfazed by early kick-off Manager Arsene Wenger is confident Arsenal will not be caught out by the early kick-off time when they host Manchester City on Saturday lunchtime.The Gunners struggled in their early away Barclays Premier League games last season, beaten 6-3 at the Etihad Stadium, before going down 5-1 at Liverpool and then humiliated 6-0 by London rivals Chelsea in March, which was Wenger's 1,000th match in charge.Wenger, however, insists there is no reason to believe his team - which could include a debut for England forward Danny Welbeck following his B#16million deadline day switch from Manchester United - will have no problems with a slow start this time around."At home, we have played well at 12:45

It is not the kick-off time, it is your performance, how you turn up," said Wenger."At 12:45 or three o'clock - for me that is just talk, the rest is the quality of the performance that counts."Wenger continued: "[We were worse] away from home, but I think the coincidence was that we played against very strong teams away from home at 12:45."I think it was more the quality of our opponents and the lack of quality in our performance that produced a result, not the kick-off time."I have heard that many times - would you rather kick-off at three o'clock or 12:45? It is two hours and 15 minutes, that does not produce a miracle in your physical recovery."Sometimes maybe, on our side, we go a bit too much overboard on that

I like it."Arsenal are yet to lose a Premier League game, but were held to a goalless draw at Leicester before the international break.The Gunners have already beaten Manuel Pellegrini's men once this season, sweeping aside an under-strength team 3-0 in the FA Community Shield at Wembley on August 10.Wenger feels Saturday's match, for which Wales midfielder Aaron Ramsey is a doubt because of an ankle injury, provides another chance for Arsenal to prove they can cut it with the Premier League title contenders."We have now got the opportunity to show that we have grown as a team, that we are more mature and ready for the fight, so let's do it," he said."I don't think that this game is very important for us mathematically because we dropped points away from home, but it gives us credibility and confidence to do well."The Premier League this year is very, very important for us and of course a game against Manchester City becomes a very important game."Arsenal captain Mikel Arteta (ankle) is back in full training, along with goalkeeper David Ospina (thigh) and full-back Kieran Gibbs (hamstring)

German playmaker Mesut Ozil should be available after returning early from international duty because of a sprained ankle.Meanwhile, City manager Manuel Pellegrini has revealed Financial Fair Play restrictions were the key factor in striker Alvaro Negredo's departure.Negredo joined Valencia on transfer deadline day last week in a loan deal that will be made permanent next summer.The transfer raised eyebrows as Negredo had impressed since his B#20million signing from Sevilla last year and his exit leaves the champions with just three frontline forwards.But City were under pressure to leave a senior player out of their Champions League squad having been limited to a reduced roster of just 21 by UEFA as punishment for breaching the European governing body's FFP regulations.With Negredo sidelined until the end of October with a broken metatarsal he seemed an obvious candidate for omission for the first part of the season.This, combined with a desire from the player to return to Spain, led to City accepting an approach from Valencia.Pellegrini said: "The decision for Alvaro Negredo to go was for two very important reasons."The first was that we have the restriction for the number of the players we can use in the Champions League."We had one player more, (and) we could not use Alvaro, who was injured, so he was the player who was not going to be on the list."For him, it was very important because he wanted to go back to Spain, so I thought it was the best decision for the club."But it all starts from the restriction about the number of players

We have restrictions about the amount of players and the money we can spend."In addition to the reduced squad, City were also fined B#49million and forced to limit their net summer spending to B#49million.Pellegrini said: "It is difficult for me to understand the punishment because the club spent money because they wanted to grow, they finished a new training ground."They were a small team and wanted to be a big team but now we have that punishment, that sanction, and we have to play with these restrictions."Midfielder Fernando looks likely to miss out after limping out of the Stoke defeat with a groin problem

Striker Stevan Jovetic suffered a hamstring injury on international duty with Montenegro and has been ruled out this weekend.New B#32million defender Eliaquim Mangala and former England midfielder Frank Lampard could be in line for debuts after building up their general fitness