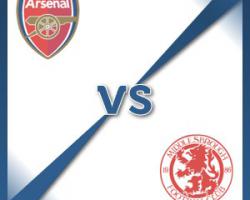 Arsenal V Middlesbrough - view commentary, squad, and statistics of the game live.Top-four finish priority for WengerArsene Wenger claims every Premier League match is like a cup contest for Arsenal in their bid to secure a top-four finish and a place in next season's Champions League.The Gunners play Monaco later this month after qualifying for the knockout stages of Europe's elite competition for a 15th consecutive season, but their participation in next term's Champions League is in doubt in a competitive Premier League.Arsenal continue their FA Cup defence in Sunday's fifth-round clash with Middlesbrough, but Wenger knows priorities lie elsewhere."Our basic is always to finish in the top four and then win a trophy on top of that," said Wenger, whose FA Cup success last term ended a nine-year trophy drought."We want always to be in the Champions League and this season it will be very difficult, because it's very tight if you look at the table - every game now becomes a cup game."The FA Cup is a competition Wenger wants to do well in, though

"We have won (the FA Cup) five times during my period here," he added."Nobody has won it more in the last 18 years, so we have always taken the competition seriously."Wenger plans to rotate his options and could give Gabriel Paulista his debut in defence and rest Germany World Cup winner Per Mertesacker.The 24-year-old Brazilian signed from Villarreal for a reported B#15million fee in a deal which attracted attention due to Arsenal's repeated defensive failings in recent seasons.Wenger has no doubt Gabriel has the ability to swiftly adapt to English football, but the Arsenal boss has concerns that the language barrier could make life difficult.Gabriel's English is "very bad", Wenger said

You need to know the key words

Foul."(But) he has the physicality and motivation

He has an opportunity to show that now."Gabriel is the first defender Wenger has bought with no English at all, although Jose Antonio Reyes' command of the language was limited even when he returned to Spain.Aitor Karanka will not allow himself or his players to get carried away as he attempts to manage the demands of a dual bid for promotion and FA Cup glory.Middlesbrough's head coach guided his side to the top of the Sky Bet Championship table on Tuesday evening by way of a hard-fought 2-1 win on a pudding of a pitch at Blackpool.On Sunday, he will send team into battle once again, this time on the billiard table playing surface at the Emirates.However, whatever happens in the red and white corner of North London this weekend, Karanka is adamant that he and his players have achieved nothing yet despite their lofty position and the fourth round shock they pulled off at Manchester City.Asked if the club's fans could dare to dream, he said: "I am very, very excited

When I go home and I think about how the team was when I came here and how it is now, I am very pleased, very proud."But I have to think about the future because nothing is done and the day that I think everything is done, I am making a very big mistake."For a few days at least, the FA Cup will take precedence at the Riverside Stadium as Boro, who were beaten finalists in 1997, attempt to upset the odds once again and repeat their heroics at the Etihad Stadium by dispensing with another Premier League high-flier.The squad assembled by Karanka is light on top-flight experience, but has among its ranks a man who has played at the top both at home and abroad.Former England defender Jonathan Woodgate has been a largely silent partner this season as injuries have once again taken their toll on his 35-year-old body.Woodgate made his first league appearance - and scored - at Bloomfield Road on Tuesday evening a matter of weeks after telling Karanka he was contemplating retirement.The Spaniard managed to talk the former Leeds, Newcastle and Real Madrid defender out of it, and is delighted to have done so.He said: "He is very, very important for me and I am very, very pleased to see him enjoying this moment because he said two weeks ago he was thinking about retirement."I convinced him and now he is enjoying the moment