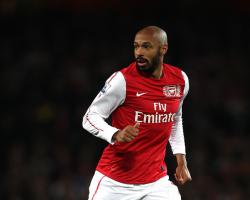 Arsenal V Southampton - view commentary, squad, and statistics of the game live.Injuries still plague ArsenalArsenal have concerns over defenders Nacho Monreal (knee) and Kieran Gibbs (ankle) as well as midfielder Alex Oxlade-Chamberlain (knee) ahead of Wednesday's Barclays Premier League clash against Southampton.Goalkeeper Wojciech Szczesny (hip) and captain Mikel Arteta (calf) are still out along with Theo Walcott (groin), Mesut Ozil (knee), Mathieu Debuchy (ankle), goalkeeper David Ospina (thigh) and Jack Wilshere (ankle).The pre-match talk has centred around Thierry Henry after manager Arsene Wenger revealed the Frenchman will "certainly" return to the club in some capacity in the future.Henry confirmed on Monday that he will leave the New York Red Bulls after four-and-a-half years with the Major League Soccer franchise, prompting speculation that a return to Arsenal could be in the offing.The Gunners' all-time record goal scorer has retained close links with the club since leaving for Barcelona in 2007 and trained at their Hertfordshire base before a brief loan spell during January 2012.Henry had hinted during a recent interview with French newspaper L'Equipe he could be interested in a future coaching role with the Gunners, and Wenger insisted on Tuesday that Henry's return is a certainty when asked about a reunion with the former France striker."He is an Arsenal man

The best moment certainly of his life and of his career has been experienced here," Wenger said."Certainly one day he will come back here

In what role I don't know, that is what he has to think about: what direction he wants to give to his next life."Influential holding midfielder Morgan Schneiderlin will miss out for Southampton with a leg injury.The 25-year-old France international must undergo scans to determine the extent of the injury suffered in Sunday's 3-0 defeat to Manchester City.Ronald Koeman accepts Saints face a "difficult" challenge to cope without their "key player".France midfielder Schneiderlin hobbled out of Saints' 3-0 Premier League defeat to Manchester City at half-time on Sunday.The 25-year-old midfield lynchpin now faces scans on his right adductor, with manager Koeman admitting he does not know the severity of the problem."Morgan's not ready for Wednesday because he needs a scan on his adductor, in his right leg," said Koeman."Then we have to wait about the result of the scan."For sure he isn't available for this Wednesday, but he'll have scans to find out exactly what happened."It's too soon to know whether it's serious."It's not too soon to say he can't play on Wednesday, but how long he will be out I don't know."Centre-back Toby Alderweireld could step up into midfield, or fit-again Jack Cork could start alongside Victor Wanyama at the Emirates Stadium