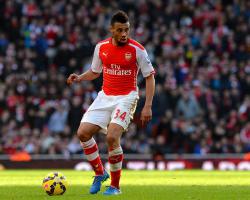 Arsenal V Sunderland - view commentary, squad, and statistics of the game live.Wenger still pushing for secondArsenal manager Arsene Wenger wants his side to keep fighting for second place as Sunderland arrive at the Emirates Stadium for each team's penultimate game of the Barclays Premier League campaign.Wenger's men responded from last week's disappointing home defeat to Swansea to earn a 1-1 draw at Old Trafford on Sunday, keeping them two points ahead of Manchester United, and they can secure third place by beating Sunderland.But, with Manchester City five points ahead and facing a tough game with Southampton on the final day, Wenger will not take things easy before the FA Cup final and wants his team to keep the pressure on as they look to achieve a first top-two finish since 2005."We would like to finish first, but that is mathematically impossible so we need to finish as well as we can," said Wenger, who will check on the fitness of Laurent Koscielny following the defender's bout of flu."We have the possibility of taking six points, but it will not be enough (for second place) if Manchester City win their last game against Southampton."How much chance do we have? I don't know

The only chance we have is to win our games."Sunderland are battling at the other end of the table, with the goalless draw against Leicester leaving Dick Advocaat's side a point away from securing their top-flight status."Sunderland are in search of a point to be safe, so I expect them to be well organised defensively and to be sound at the back, and to try to use all the counter-attacks they can, all the set-pieces they have, to score goals," said Wenger."We have to put a high rhythm into this game and play with a high level of energy to win."Arsenal will again be without forward Danny Welbeck (knee) and midfielder Alex Oxlade-Chamberlain (hamstring).Both players face a race against time to be available for the FA Cup final against Aston Villa."They all have to get fit very quickly now because there is not a long way to go (to the cup final)," Wenger said.Adam Johnson could have a significant role to play for Sunderland a little more than 48 hours after the England international appeared before magistrates to face three offences of sexual activity with a girl under 16 and one of grooming.Johnson, whose solicitor indicated at Peterlee Magistrates' Court that the player would deny all the charges, could start, according to head coach Advocaat.Advocaat said: "He's in the squad and when you are in the squad, there's always a chance you will start."This team works so hard and you have to fair to all of them, but Adam is a player who can do something different for us

His style is different from others, and you saw that when he came on against Leicester."Johnson is yet to be named in the starting line-up by Advocaat, who will take charge of his eighth and penultimate - for the time being, at least - game in North London, but has come off the bench in six of the previous seven.Advocaat remains coy over his own future amid speculation that he could extent his stay at the Stadium of Light should he manage to keep the club up.Reports from Holland have suggested he has promised his wife he will not commit to a longer-term role on Wearside, although he was giving little away when quizzed about his future on Tuesday afternoon.He said: "We will see

Next week, I will take the decision."