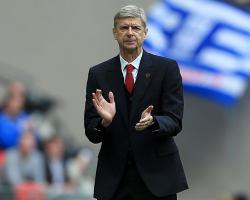 Arsenal V West Brom - view commentary, squad, and statistics of the game live.It's all about margins for Wenger Arsenal manager Arsene Wenger feels it is strange to see such a wide points gap from top to bottom in a Premier League season which has proved anyone can beat anyone.The Gunners host West Brom on Sunday, one of several sides who are not yet mathematically secure of their top-flight status heading into the final two matches.The campaign has been so full of unexpected results - including a win for the Baggies at Old Trafford in September, a first for 35 years - that they can no longer be considered as genuine shocks, with Sunderland's recent win at Chelsea the latest case in point.Considering the need for all sides to guard against complacency when coming up against teams below them, Wenger believes the fact leaders Liverpool have more than double the points amassed by 12th-placed Swansea makes no logical sense.He said: "It is strange because it looks like every big team could lose everywhere (this season) and you would think that the difference between the teams has been much closer."But if you look at the points, the gap between the top teams and the bottom teams is bigger than any other year before, so there's a little bit of a contradiction between what we've observed visually and mathematically."Wenger, though, is determined not to allow his side to fall victim to another statistical anomaly this weekend, when Arsenal could wrap up fourth place and with it a shot at Champions League qualification once again."One of the ingredients we have this season is a response when everybody was writing us off," said Wenger."We've always responded in a very strong way, which means the mentality is strong and healthy and united inside the camp."The challenge now is of course to beat West Brom."If you look at the names that they have in the team, they're a good side, so we must play with a good focus and feel that we get stronger in every game."Recently we've been better in every game and controlled much better the games compared to one month ago."Arsenal's title challenge faded after the turn of the year when they were unable to overcome the loss of key men like Theo Walcott, Aaron Ramsey, Jack Wilshere and Mesut Ozil to various spells of injury."We have missed some vital games and that is the regret we have of the season, some turning points in the season away from home where we failed to turn up with the right performance," Wenger said."Overall, though, we have been remarkably consistent."We played in the Champions League against Bayern, we are in the final of the FA Cup, coming through having played many big teams, we are seven points off Liverpool, who only played one competition."But in the Premier League

yes we missed some games and we pay for it now."West Brom's Spanish boss Pepe Mel believes Wenger would have been sacked had he experienced a similar trophy drought in La Liga.Wenger's barren spell with the Gunners stretches back nine years, yet the north London club have kept faith with their French manager.Mel has the utmost respect for his opposite number, but the former Real Betis boss admits such a poor recent record would not be acceptable at a top Spanish side."I don't think Arsene would have survived in Spain," he said

"Carlo Ancelotti at Real Madrid is a good example

Three months ago he was under real pressure and now they are in the Champions League final."In Spain, England and Germany it is always the same, the head coach lives for the results."But I'm not surprised Arsene is still in a job as I agree with Arsenal

He has a good philosophy."Mel believes his side need one more point to effectively secure their top flight safety.The Spaniard endured a difficult start to life at The Hawthorns after replacing Steve Clarke in January, with victories hard to come by and off-field problems - such as the sale of Shane Long to Hull and the Nicolas Anelka 'Quenelle' saga - exacerbating the situation.However, victory against West Ham put them on the verge of survival and Mel admits his job is more enjoyable at the moment."I enjoy my job and being at West Brom, and the fans," he said

"But January and February were very, very difficult for me, with Long leaving and the Anelka situation and more."The most important thing is at the end, though."If West Brom stay in the Premier League it is good work

But I want more than safety."I'm ambitious and want more

The next season in 17th is not enough

We want next season to be even better."