With Chelsea six points clear of Arsenal and Manchester United, a win for Maurizio Sarri would open up a healthy gap between themselves and the Gunners, but Manchester United could be just three points off fourth place by kick off in north London, as the Red Devils face Brighton at 3pm. 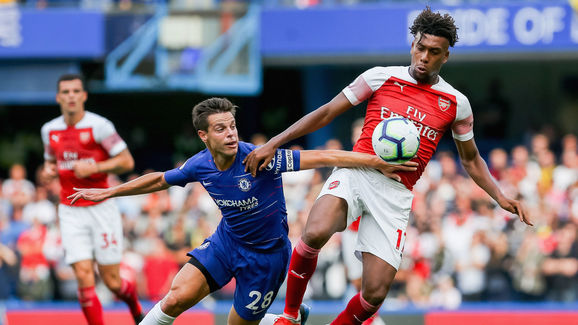 A defeat for Arsenal would give Unai Emery a mountain to climb to reach the qualification places for the Champions League, while a win for ​Chelsea would see them leapfrog Tottenham Hotspur in third, at least until Spurs travel to Fulham on Sunday.

​Arsenal are still without Rob Holding and Danny Welbeck who are sidelined with long-term injuries, while ​Henrikh Mkhitaryan remains injured but is expected to return next month.

Lucas Torreira was rested in Arsenal's 1-0 defeat to West Ham United last Saturday but should return to the starting eleven, as should Hector Bellerin who came off the bench in that game. The big question mark will centre over the participation of Mesut Ozil, who failed to make the squad for the West Ham defeat despite being available.

Alvaro Morata is doubtful for Chelsea with a hamstring problem, but Sarri could have a new number nine by Saturday evening as a move for Gonzalo ​Hi​guain grows ever closer.

Gonzalo Higuain from Milan to Chelsea, here we go! ✅
Agreement reached between Juventus and Chelsea for Higuain: loan + buy option for 6 months; it can be extended as loan also for one… https://t.co/5QgBR3utkD

If the deal is completed, it may come too soon for the Argentinian with Eden Hazard expected to lead the line in a false nine role.

Ruben Loftus-Cheek remains on the sidelines for the Blues, with Ross Barkley and Mateo Kovacic jostling for the third midfield spot.

Both sides met in August as Marcos Alonso’s winner gave Chelsea a 3-2 win but Arsenal fans will feel they should have won comfortably with Pierre-Emerick Aubameyang and Mkhitaryan missing huge first half chances.

Arsenal’s 3-0 win against Chelsea in 2016/17 was their first win over the Blues since 2011, but the Gunners do have the better overall record in this fixture, with 75 wins compared to the Blues’ 63 in all competitions.

The Chelsea manager will apparently say anything for a free case of energy drinks.

In their last match Arsenal fell to a 1-0 defeat to West Ham and have managed just two wins from their previous five games. This run includes the 5-1 away defeat to Liverpool in December and has resulted in the Gunners being caught by a resurgent Man Utd. Chelsea unconvincingly beat Newcastle United 2-1 last weekend and have found goals to be a rare commodity of late. Before the Newcastle game, Sarri’s men had failed to score in three of their previous six games in all competitions.

Here’s how each team has performed in their last five league fixtures:

Both teams may be too afraid to go all out for a win, as a defeat for Arsenal could hugely dent their top four chances and Chelsea won’t want to let Arsenal back into that race.

If Chelsea get into their rhythm and Jorginho is able to dictate play, something he has struggled to do recently, then Arsenal could be in for a tough evening. With the Red Devils breathing down their necks, the Blues must throw off the shackles and do their utmost to sneak a win. One goal may nick it, but it really could go either way.