To wrap up our the first feature of our 50 best derbies in the world series, we have something nice and fun for you. And trust us, it wasn't an easy selection process.

It is of course 90min's  definitive all-time classic combined Arsenal and Tottenham XI. Only the best of the best, and those players who stood head and heels over their teammates.

Now, there is of course a wide variety of options for the majority of positions that need filling. It is subjective - there might be some players whose inclusion you find unjust. And that's fine! There will be several sensational starting XIs that we could have put together, but this is the one we went with in the end.

So, without further ado, here's the classic combined Arsenal and Spurs XI. We're going with an attack-minded 4-2-2-2 - nice and modern! And we start with... Mr. Jennings spent a large part of his career at Spurs before making the switch to the red half of north London. An ideal candidate for a combined XI then. And, he just pips ​Arsenal legend David Seaman to claim our goalkeeping spot.

All things considered Jennings remains one of the legendary shot-stoppers in English footballing history. 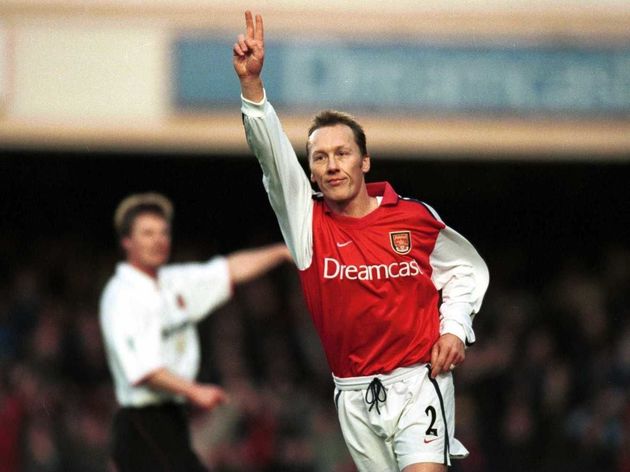 ​You could have gone with a couple of Spurs lads here, but all things considered, Lee Dixon is more than deserving of claiming the starting right-back berth.

The Englishman spent a wonderful 14 years at Highbury, and the defensive assurance he provided went a long way to contribute towards the four league titles, three FA Cups, and European trophy he won with the Gunners.

Dixon was a truly classic 'old-school' full back, and in this team he would both dominate his one on one duels as well as providing a solid attacking outlet marauding up and down the pitch. Another whose inclusion is worth it simply because he played for both north London clubs. There were nine years at White Hart Lane of which he spent several as the club's captain.

And then, in sensational circumstances, he joined Arsenal on a free transfer in 2001. And he was a centre-back stalwart during the Gunners' success of the early 2000s - not only did he play a crucial role in the 'Invincibles' unbeaten campaign, but he helped Arsenal win two Premier League titles and two FA Cups.

As a player, he was an excellent centre-back who was without a doubt one of the greatest of his generation. And, given his ties with both clubs, it would be silly not to have him in the side...even though Spurs fans hate him. ​Adams remains the Gunners' greatest ever captain, and Mr. Arsenal breezes into this classic combined XI, simple as that.

Having demonstrated his innate leadership skills from a young age, Adams was appointed club captain aged 21. And, he led Arsenal to four league title successes across three decades.

He wasn't a bad player then, and given he's got everything you want in a centre-half, his inclusion alongside Campbell completes a salivating centre-back pairing. Good luck trying to get past these two. ​​Bale's inclusion at left-back is slightly cheeky, we must admit. But, as we all remember, he did actually start his Spurs career playing in the position, so in some ways it would be illogical not to have him at left-back...right? Right? Ok, well maybe not.

Prior to his then world-record move to ​Real Madrid in 2013, Bale was setting the Premier League alight with some truly astounding performances, and l​Inter

The twice PFA Players' Player of the Year, FWA Footballer of the Year, and ​Premier League Player of the Season hit new heights in the 2012/13 campaign, and we grew accustomed to see some simply stunning long-range strikes, lung-busting runs, and overall world-class football from the Welshman. He's got to be in here, that's for sure. Spurs must have grown sick of the sight of him dominating the centre of the park down the  years, as well as captaining the 'Invincibles' side, and scoring several sumptuous goals against Spurs during his time in north London.

But now that we're combining the two clubs' best ever players, ​Tottenham don't have to worry about facing Vieira as their opponent, and can enjoy having his footballing excellence on their side for once. Selecting Vieira's central midfield partner was no easy task. Perhaps it ought to have been Tottenham's modern midfield maestro in the shape of​ Luka Modric? Maybe Arsenal's Spanish magician Cesc Fabregas? Let's not forget Glenn Hoddle too, what a midfielder he was at the peak of his powers.

But, on the grounds of his uniquely exceptional skillset, Gascoigne gets the nod. Now, he might not have had the illustrious club career that some of his teammates in this classic XI had, but based on pure footballing ability, there aren't many better than this man.

After all, he is largely recognised as the 'most naturally gifted English footballer of his generation'. Good to have you in the team Gazza. 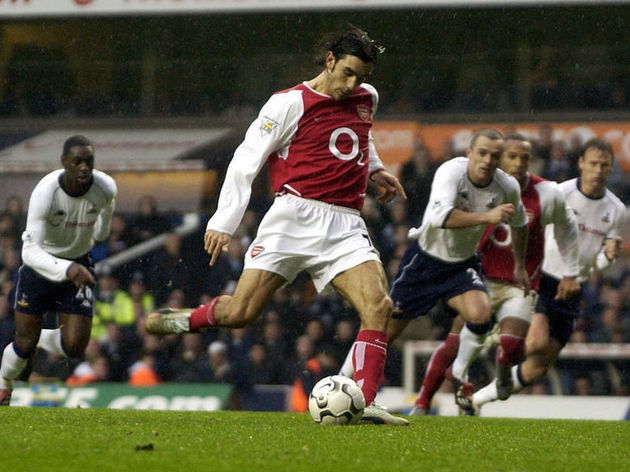 ​There's no doubting this man's quality. Some may feel that others deserve to start over Pirés. But, the Premier League has seen few wingers wow to the extent the Frenchman did during his time in north London.

The 2002 FWA Footballer of the Year also loved scoring against Spurs - he managed eight against them in total. The French maverick ensures this machine remains well oiled as he provides the silky link between the midfield and attack. 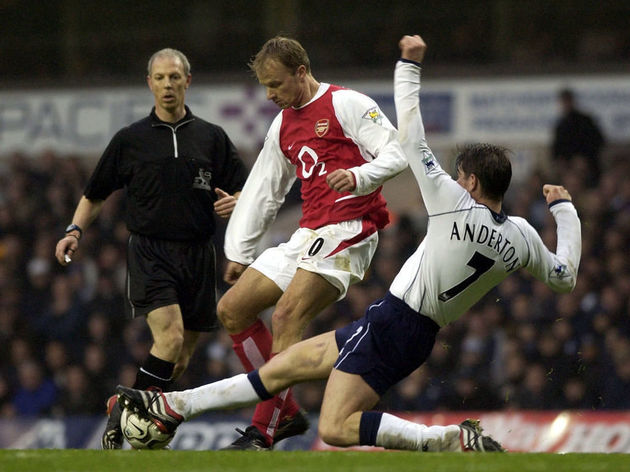 ​There's no disputing the delightful Dutchman's position in our Arsenal and Spurs' classic XI. Neither side have witnessed a more pure form of footballing genius than what Bergkamp displayed during his 11 years in north London.

As we all know, the 1998 PFA Players' Player of the Year was blessed with divine technical ability, and given the quality around him in this side, the Dutchman would have a field day in this team.

Honorary mention to Spurs' David Ginola. He was also a genius with the ball at his feet, but there's not shame in missing out to Bergkamp. He is Mr. Tottenham at this point, but it wasn't always the case. ​Kane was a boyhood Arsenal fan, and represented them at youth level in the early 2000s. But, on the grounds of being 'a bit chubby' and not 'very athletic', he was released. ​And, the final slot in this classic combined XI is none other than Thierry Henry. Obviously - he's the greatest player in Premier League history.

Arsenal's beloved all-time leading marksman takes his place alongside Kane in a frightening looking forward line that would produce a silly number of goals.

Honorary mention to the Gunners' previous record goalscorer - Ian Wright is unlucky to miss out on a starting position.