Arsenal are looking to build on an overall uptick in form over the last month or so when they take on West Ham this Saturday.

The Gunners just won their fifth round FA Cup tie against Portsmouth on Monday but languish in tenth place in the Premier League. They do, however, have a game in hand over the majority of the packed European-chasing group – and would be just two points off a potential Champions League place (see: City, FFP) if they were to take advantage. Meanwhile, West Ham picked up an impressive 3-1 win at home to Southampton last weekend to move out of the relegation zone on goal difference; although Aston Villa (two points behind in 19th) have a game in hand.

​Arsenal have multiple injuries ahead of this game, that particularly affect their backline. ​Calum Chambers (torn ACL) is out for the season, while full-backs Sead Kolašinac (shoulder) and Cédric Soares (knee) are also ruled out for this game. Midfielder Lucas Torreira was stretchered off on Monday night with a fractured ankle and will be sidelined as a result.

In better news for the Gunners, left-back Kieran Tierney is close to full recovery from his shoulder problem, although he is unlikely to make an appearance this weekend. 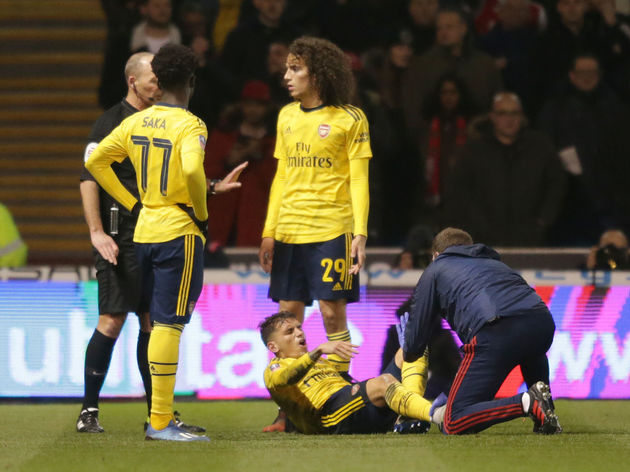 As for ​West Ham, their several injuries will test their midfield depth for the weekend's clash. Both Tomáš Souček and ​Jack Wilshere are suffering from hip problems, while Ryan Fredericks recently underwent shoulder surgery and is not expected back for some time.

The Gunners won decisively in the reverse fixture earlier in the season with an away 3-1 win. Despite Angelo Ogbonna's opener, goals from Gabriel Martinelli, Nicolas Pépé and ​Pierre-Emerick Aubameyang brought the three points back to north London. Arsenal have won the lion's share of the 47 meetings – with 30 victories to the Hammers' eight.

The east London club have won recently at the Gunners' home however, recording a 2-0 win in 2015 – although Mikel Arteta's team have since picked up the last four victories when playing at home.

Here's how both teams have fared in their last five games.