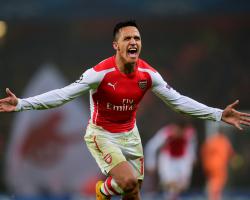 Over 200,000 votes were cast since the final ten man shortlist was announced at the start of this month and Sanchez beat off competition from Chelsea midfielder Eden Hazard who finished second and Manchester City striker Sergio Aguero who finished third to take the award.

Sanchez also scored both goals in the FA Cup Semi-final against Reading and he has the chance to end his first season in English football with silverware if Arsenal can beat Aston Villa at Wembley on Saturday evening and retain the FA Cup.

Sanchez has continued to score consistently throughout the season scoring braces in the victories over Sunderland, Burnley and Stoke as well as goals against Manchester City and Liverpool

A player with great technique, he has played out wide as well as through the middle for Arsenal this season and has scored goals from both inside and outside the box

Sanchez was deservedly named the PFA FansÃâ Player of the month in October in which he scored three goals and one assist and his fine form for Arsenal also saw him included in the PFA Premier League team of the year.

One lucky fan voter will be chosen to present Sanchez with the award in person at an Arsenal home game next season.