Arsenal's New Dawn: All Isn't as Rosy as it Seems at the Emirates (Seriously, Chill Out) (Again)

​Twitter's weird, innit? If you're online a lot, as the vast majority of football writers are, it's very easy to get caught up in the cycle of thinking that all fans are absolutely blinding wrong 'uns without any sense of perspective.

Obviously, that's not true. But sometimes – just sometimes – you'll say something about Arsenal and start to wonder... 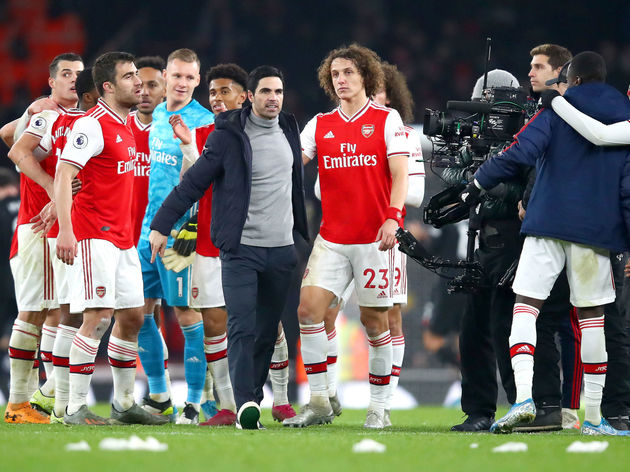 And that brings us onto Mikel Arteta, and polarisation. The kind of polarisation that leads to an Arsenal fan and writer to say, "...the turnaround he has overseen ever since [taking over] has been nothing short of biblical."

Raheem Sterling hasn't scored for a couple of games. Cue scores of people calling Arteta the brains behind his turnaround as a player at City, some joking but some...not.

So apparently we have to do this again. Four months after we did it last time. Mr Buzz Killington has to come, knock on the window and say 'hi Arsenal fans, we actually really like some of you and if you keep building this up, it's going to hurt when all of this comes crashing down around you in a few months'.

When the season started with a £72m signing, a real and good left-back arriving, an experienced centre-back, whatever Dani Ceballos is, and two wins? Everything went very silly. I ended up writing ​this because...well, partly because it's my job and mostly because it was way too soon and I just wanted people to have a little bit of perspective. So they didn't get over-excited.

Arsenal Twitter piled on and called for my accreditation to be revoked, called me 'salty', 'clout-chasing', 'a turd' and a 'f--king idiot' (those last two from the same person).

Then Arsenal failed to win nine of their next 11 league games, Unai Emery got fired and Arsenal fans were sad. Because they'd gotten their hopes up too early.

So when everyone starts to get a little silly about the Mikel Arteta regime after four games...you can see where this is going.

Very glad to hear Lacazette say that Arteta went mad at the players at HT. Shows that Mikel not only has a top footballing brain but also has the minerals to bollock the players when needed.

The best coaches have great ideas AND personality.

What we do know is that he's managed four games as a first-team coach (five if you count the time he took the reins against Lyon when Pep Guardiola was suspended, and then lost) and won two of them. That's nowhere near enough evidence to call him a bad manager – nothing he does this season will seal his fate there one way or another – but it does make this anointing feel premature.

Some of the signs are good. Arteta has coached under one of the generation's finest managers and played for five years under a manager who revolutionised the Premier League. He came through La Masia. He's got Pedigree with a capital P.

You know what's happened to a lot of players-turned-managers with Pedigree? They're crap.

Jaap Stam played under Carlo Ancelotti and Sir Alex Ferguson, among others. As a player, his positional and tactical sense were outstanding. He started his coaching career at Ajax, learning in one of the most renowned talent factories in the world. He's been deeply, abjectly crap every time he's been given a leading role.

Thierry Henry played under Ancelotti, Guardiola and Arsene Wenger – before coming to hone his coaching skills under Wenger again at Arsenal. He was an unmitigated disaster when he was finally let off the leash at Monaco.

Interviewer: “What did your manager say at half time?”

Lacazette: “He shouted a lot. He wasn’t happy.”

Finally, Arsenal have a manager who is ready to go through the players. Arteta 👏 #ARSLEE

The list of managers who played under Ferguson at some point is bleak. Wenger's isn't a whole deal better, and Guardiola hasn't been managing long enough to really produce anyone. Taking the coaching side alone, Carlos Queiroz (sacked after ten months at Real Madrid in only high-profile club job) and Steve McClaren (Steve McClaren) are the only two Ferguson assistants who have made anything at all of themselves.

Again, none of this is to say that Arteta will be a bad manager. He might be brilliant. But Arsenal fans, for the second time in four months, just chill out and let it happen. And stop being dicks about it.