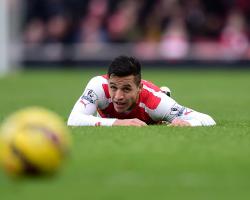 The 26-year-old Chile forward is still sidelined with the hamstring problem that saw him miss last weekend's 5-0 rout of Premier league rivals Aston Villa, even though he is now back in training.

"The latest is that Alexis is not ready," said Wenger as he confirmed Sanchez, who has scored 18 goals in 32 appearances in all competitions for Arsenal so far this season, would miss Saturday's match at White Hart Lane.

"He is not far away, the Leicester game is a possibility

He is of course very difficult to keep quiet," added the veteran French boss

"He is training but it's light training."

But Wenger had better news for the Arsenal faithful regarding Danny Welbeck, with the England forward back in the squad to face Spurs having not yet played in 2015 because of a thigh injury.

Arsenal are currently fifth in the Premier League table, level on points with fourth-placed Southampton, having lost just one of their last 11 matches in all competitions and won five in a row.