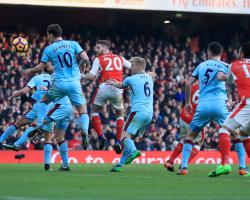 The Gunners moved up to second place on Sunday after Alexis Sanchez's last-gasp Panenka penalty saw them beat Burnley 2-1 with 10 men, having had Granit Xhaka sent off half an hour into the second half.

The winner arrived after Andre Gray had got the Clarets back on level terms, also from the spot, in the second minute of stoppage time.

Chelsea are now eight points clear at the summit but Mustafi, a summer arrival from Valencia, reckons everyone at the Emirates Stadium will continue to fight for the title.

Asked if the club had the momentum to challenge in the title race, the Germany defender replied: "Yes, as Arsenal you want to go for it and you look in the eyes and see that no-one gives up until the last second and it shows how much belief we have in ourselves and that we are going to go for it.

Playing at home to Burnley, you want to take the three points and if you want to stay up there it is something you have to do and that is what we did.

"Even when Burnley scored the equaliser I looked in the eyes of the other players and you can see we never give up.

"In other games it looks like Arsenal aren't going to come back or it is going to be a draw, we score in the last second just because everyone believes in it and I think you have to give credit to this team."

And, when Gray thrashed home only Burnley's fourth away league goal of the season from the penalty spot in the 92nd minute, it looked as though the wheels were coming off Arsenal's title bid.

Manager Arsene Wenger certainly thought so as he was sent to the stands for arguing on the touchline after referee Jon Moss awarded the penalty - later apologising for pushing fourth official Anthony Taylor.

Wenger's side have earned plenty of plaudits this season for their never-say-die quality, having hit several vital late goals

Koscielny scored a stoppage-time winner in the reverse fixture in October and, following this win, Arsenal have taken 10 points by scoring goals in the last four minutes of six league matches so far this season.

Without those late strikes, Wenger's side would be languishing down in seventh place, but Mustafi is now becoming used to last-gasp heroics.

"To be honest, yes," he said when asked if he had ever seen a game end in such circumstances.

It is nicer to win in the last second than lose."

The England international has been in fine form for Sean Dyche's side this season but admits they need to see out games to pick up more points.

"The lads thought it was harsh at the time but I will reserve judgement until I see it again," he told Burnley's website when asked about Arsenal's late penalty award.

"That's by the by, really

We've got to see it through and, unfortunately, we didn't

We have been on that journey of improving in the last three, four or five games.

"(Sunday) is another great example of it

We played some good stuff at times and have gone very, very close and hopefully next time round we'll come away with three points.

"We went about the game well

We went 1-0 down and then after they had the man sent off we mixed it a little bit and created a few chances.

"We got the breakthrough with the penalty and it was massively disappointing to concede a penalty ourselves so late in the game and come away with a defeat."